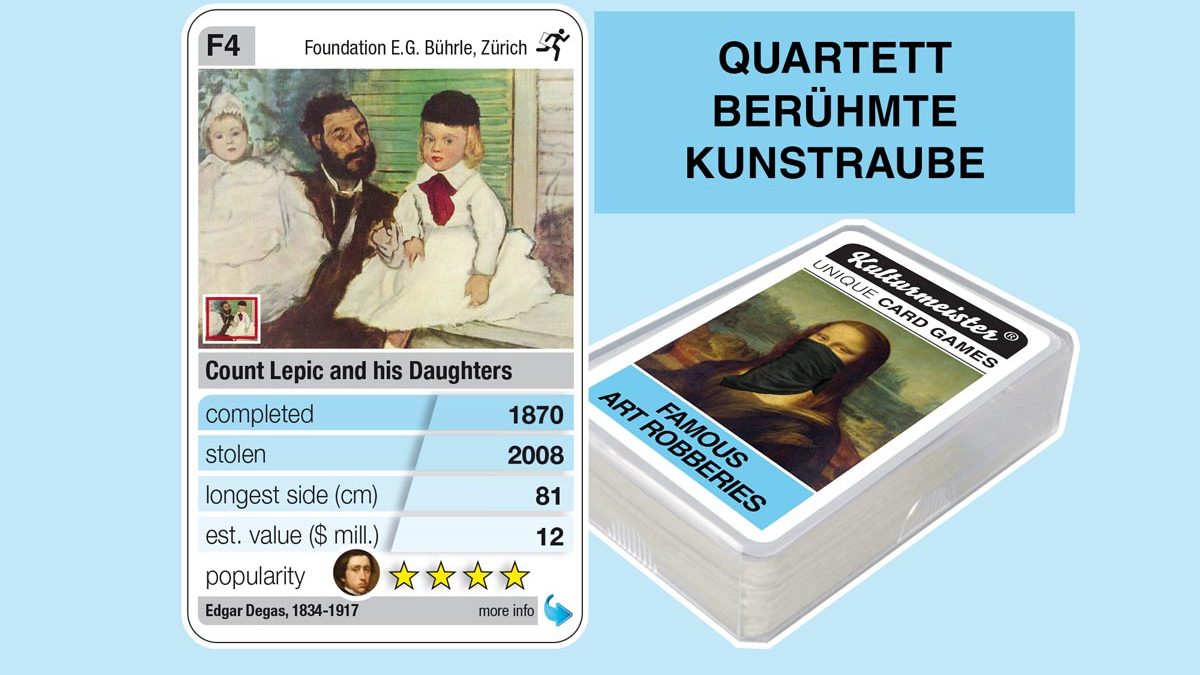 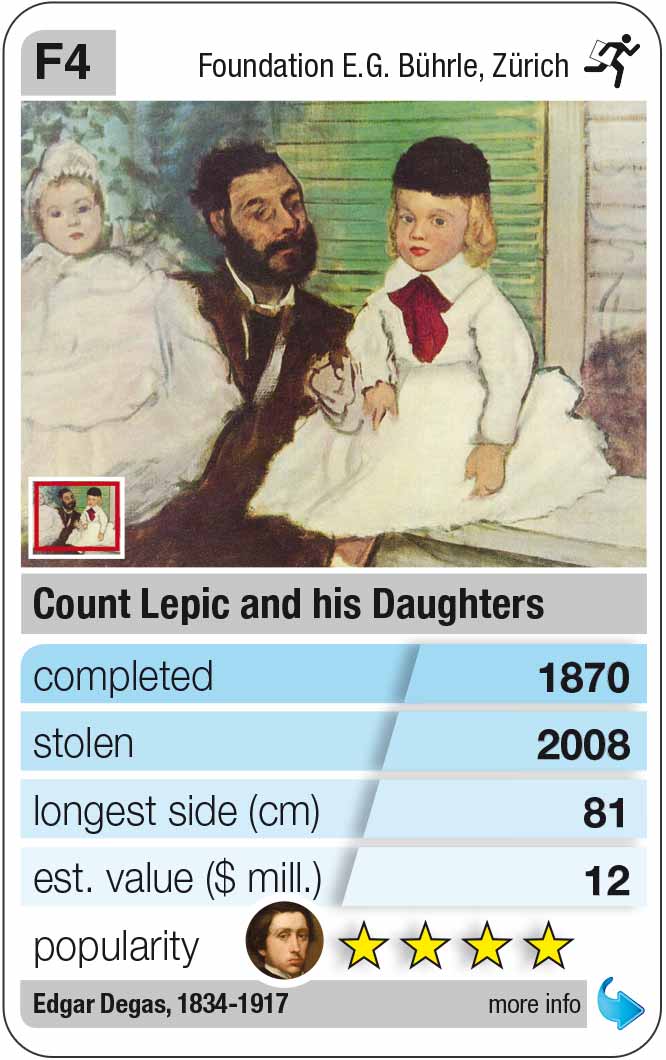 Edgar Degas: Portrait of Count Lepic and his daughters (1870)

Edgar Degas, born Edgar Germain Hilaire de Gas, was born in Paris on July 19, 1834, the first of five children of a Neapolitan. Degas died in Paris on September 27, 1917. He is considered one of the founders of Impressionism alongside Claude Monet and Édouard Manet, although Degas personally preferred the term realism. His pastel painting is rated as exceptional. Degas also created graphic works, photographs and sculptures.

Degas grew up in middle-class relationships. Father Auguste de Gas managed the Paris branch of the family-owned bank in Naples. According to his will, Edgar should become a lawyer. After completing his studies, Degas devoted himself to art. Although the father did not like it, he supported his eldest son in his artistic career. In 1853, Degas became a student of Louis Lamothe. Two years later he briefly attended the École des Beaux-Arts, but dropped out of training again. Degas preferred to learn the techniques of drawing and painting self-taught.

In 1856, Degas went on a compulsory educational trip to Italy as part of his “Grand Tour”. He draws hundreds of studies based on paintings by Italian masters from the 14th to 16th centuries. After a short stay with his family in Naples, the 23-year-old Parisian travels to Rome. Degas went to his relatives, the Bellelli family, to Florence two years later.

Famous art robbery: Edgar Dega's “Portrait of Count Lepic and his Daughters” (1870) was stolen in 2008 from the E. G. Bührle Collection Foundation. Four years later it showed up slightly damaged.

In 1859 Degas returned to Paris. He moves into a studio on Rue Laval near Boulevard de Clichy. His painting, started in 1958 by the Bellelli family in Florence, is continued to be painted - it is not until 1867 that the 200 x 250 cm oil painting is to be completed. The painting also reflects his interest in portraits.

Degas tried historical painting from 1860 and completed five paintings by 1865. The themes of these paintings are of biblical, historical and mythological origin. One of the works, the painting “Medieval Battle Scene” is also exhibited in the famous Paris Salon. However, it is ignored.

At the same time he discovered the topic of horses and jockeys, which he worked on in artistic works throughout his life. From then on, Degas devoted himself to Parisian nightlife and captured social scenes. From 1866 to 1870 Edgar Degas exhibited regularly in the Paris art salon. His subjects include women in a wide variety of life situations, ballet dancers, jockeys and their horses, Parisian nightlife and prostitutes.

The economic situation of the Degas family changed drastically in the 1870s after his father went bankrupt with his bank and his brother had high business debts. With the support of the art dealer Paul Durand-Ruel, Degas was able to at least pay off his brother René's debts.

In 1874, Degas started with some fellow artists - including together with Camille Pissarro - the later famous “Impressionist exhibition” as a counterpart to the art monopoly of the Paris Salon. A total of eight exhibitions were realized by 1886. Degas contrasted his colleagues' harmonious sense of reality with his exciting milieu studies from Parisian life.

Degas withdraws more and more from the public from 1890. There are only a few exhibitions left to see. He has since turned away from Impressionism and his artistic works are becoming more experimental and more variable. Degas mainly devoted himself to photography in the 1890s. His photographic works were first exhibited in 1895.

Degas has always remained a bachelor. You never heard of a liasion either. Other voices say he was gay or pedophile. But why did he mainly paint women in a wide variety of poses and prostitutes in their immediate work environment? The Parisian painter felt that he was an outsider in the Impressionist group - after all, he saw his art not as Impressionism but as realism. He was also grumpy, very sensitive and often in a bad mood or even angry - you never knew exactly how Degas would react in the next moment.

Degas was an anti-Semite and also gave his opinion publicly, which cost him many friendships. He also refused to work with models that in his eyes looked Jewish. His anti-Semitic attitude includes in the painting “Portraits at the Stock Exchange” or “At the Bourse”. However, the anti-Semitic stance can also be misinterpreted, as his grudge may have resulted from his father's bankruptcy. Degas was very conservative and kept e.g. the invention of the phone for superfluous. The only paradox is that he was enthusiastic about the then modern medium of photography.

Degas' art theft “Portrait of Count Lepic and his daughters”

On Sunday afternoon, February 10th, 2008, three masked men invade the E. G. Bührle Collection Foundation in Zurich. According to witnesses, the men wear dark pointed hoods with eye slits. A masked man asks the museum staff and visitors to lie on the floor and behave calmly.

The two other men go into the large exhibition hall, in which ten masterpieces of Impressionism hang. They take the first four of the ten paintings off the wall and apparently notice that each painting with secured glass weighs at least ten kilograms. Apparently the two thieves are only able to carry two paintings each, because they steal only four of the ten important paintings of Impressionism. Together with the third accomplice, the art thieves disappear as quickly as they came.

The four stolen works are: “Ludovic Lepic and his daughters” (1871) by Edgar Degas, Paul Cézanne's “The boy with the red vest” (around 1888), “Blossoming chestnut branches” (1890) by Vincent van Gogh and “Poppy field near Vétheuil” (around 1879) by Claude Monet. The total value of the theft is around 130 million euros. The robbery is described as "probably the largest art robbery in Europe". However, what the perpetrators - and apparently those responsible for the Bührle collection - did not know: Van Gogh's stolen painting "Blossoming Chestnuts" is said to be a fake.

The rediscovery of the stolen paintings

The paintings by Monet and van Gogh are found eight days later in a car with a stolen license plate in the parking lot of the Burghölzli Psychiatric Clinic. However, there is still no trace of Cézanne's “boy in a red vest” (value: around 66 million euros) and Degas “Graf Lepic and his daughter” (value: around 9 million euros).

In April 2012, almost four years later, 30 investigators from six different countries track down an art thief gang that leads to Serbia. Shortly thereafter, contact is made with the alleged owners of the paintings that were still stolen: the Kripo had to pay the informants around 1.4 million euros in cash so that a meeting could be held. On April 11, 2012, the investigators struck in Belgrade: four suspects were arrested in a car with the stolen paintings by Cézanne and Degas. The pictures have cracks and a chipped edge because they have been removed from the frames. A large amount of cash and weapons are also secured. The Swiss authorities know the detainees: They have been listed as serious criminals in their database for years.