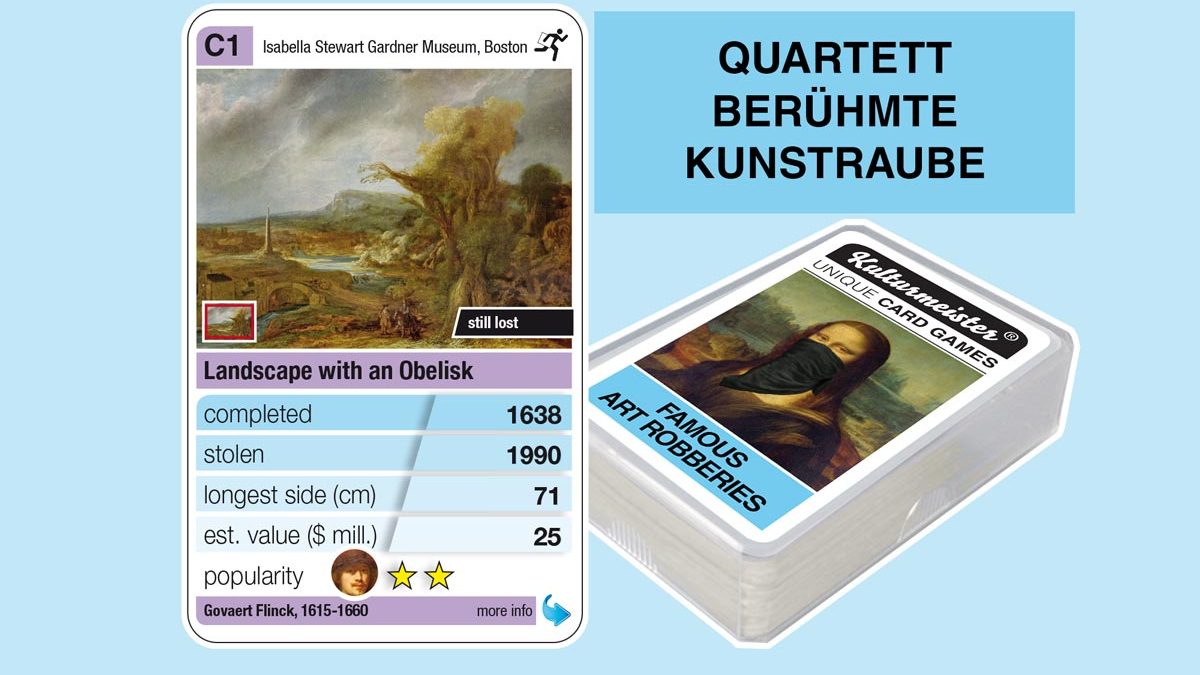 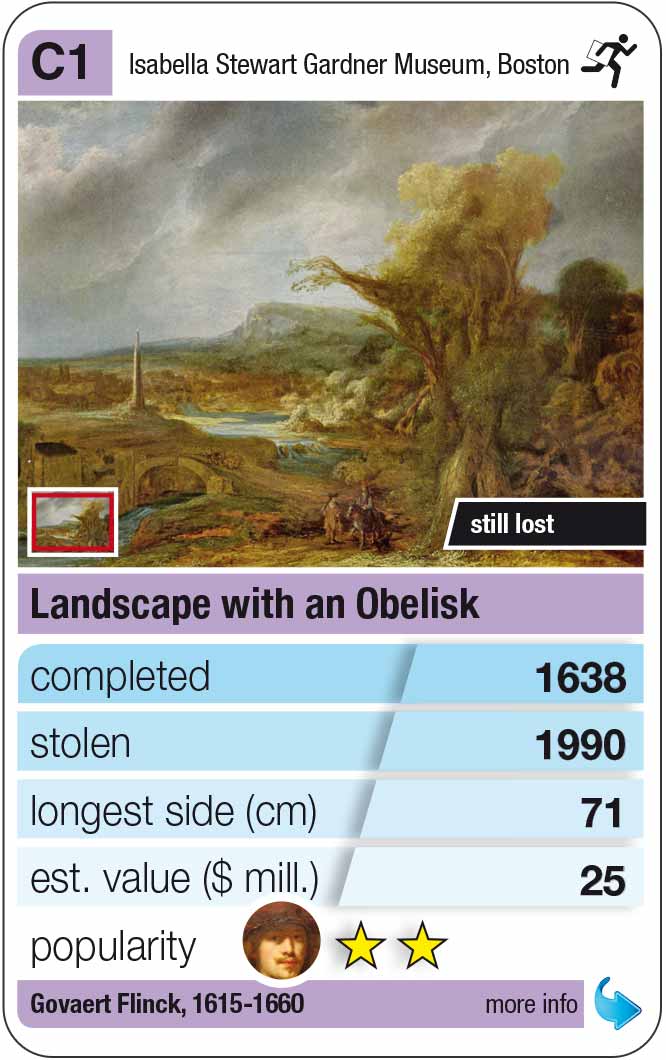 Govaert Flinck: Landscape with an Obelisk (1638)

The Dutch genre, history and portrait painter Govaert Flinck was born in Kleve in 1616 and died in Amsterdam in 1660. He was a student of Rembrandt in Amsterdam, where he received drawing and painting lessons from 1632 - 1635.

The painting “Landscape with Obelisk” was incorrectly first thought to be a painting by Rembrandt. It has the dimensions 71 x 54.5 cm.

History of Flinck's “Landscape with Obelisk”

In 1900 the art dealer Bernhard Berensen realized an art trade for the Boston Isabella Stewart Gardner Gallery with the oldest gallery in Europe, the Colnaghi Gallery. In addition to the painting “Landscape with Obelisk”, Titian's “Rape of Europa” also changed to the new owner in Boston. Titian's work is still part of the permanent exhibition in Boston - in contrast to Flinck's artwork, which is still missing. 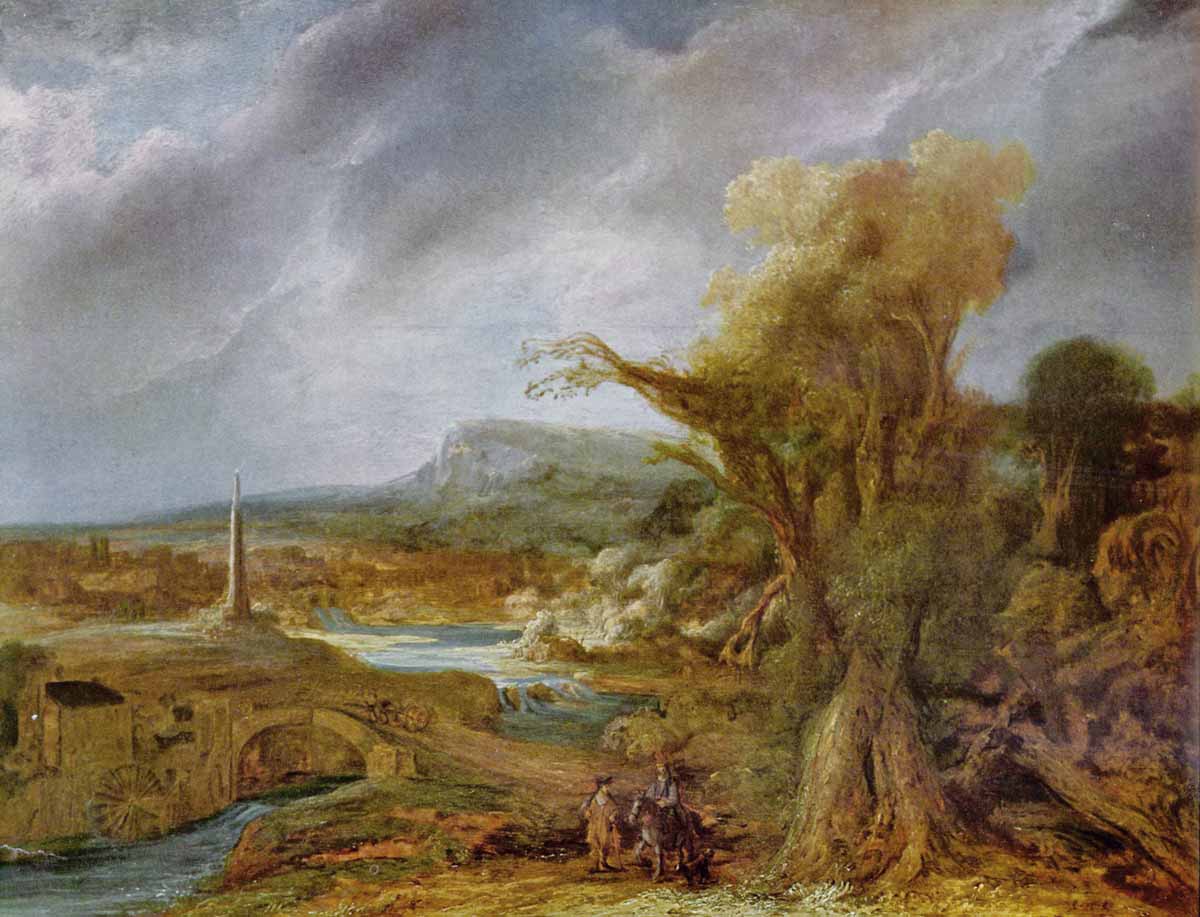 Famous artworks: Govaert Flinck's painting Landscape with Obelisk was stolen from the Isabella Stewart Gardner Museum in 1990 and has been missing since then.

The story of Rembrandt's masterpiece from 1645

While all of Boston was celebrating St. Patrick's Day in March 1990, the doorbell rang late in the evening at the main entrance to the Isabella Stewart Gardner Museum. The security service in the museum keeps watch like every other day. The value of the Stewart Gardner Museum is immeasurable: a total of around two and a half thousand important art history exhibits can be viewed here. Just not at night, especially not for regular visitors.

With security cameras, the guards see two police officers standing at the entrance. "A silent alarm was raised, can we come in?" it sounds through the intercom. The security guards' regulations clearly state that you should never open the doors without first informing the museum director. Even better, you check the silent alarm, then send the waiting policemen away from the door and do not need to inform the museum director at all, especially not on St Patrick's Day, a holy holiday. But contrary to all regulations, the guards open the door and let the two police officers enter.

Now everything happens very quickly: Both guards are overwhelmed, tied up and gagged by the police and locked in different rooms. The next day the whole world knows: Two thieves disguised as police officers deliberately stole 13 works of art from what was then $ 300 million - which corresponds to a current value of about $ 540 million. Among the paintings is Jan Vermeer's artwork Das Konzert. As a precaution, the thieves also took the videotape on which they were filmed with the surveillance camera. All 12 paintings have not reappeared to this day.

The FBI suspects Irish gangster James Bulger, who was arrested in California in June 2011, behind this incredible robbery of art - but for 19 times murder, drug trafficking, extortion and money laundering. Some claim that Burgler stole the works of art that night in 1990 in an attempt to alleviate the circumstances after his eventual arrest - this strategy is said to be common among criminals.