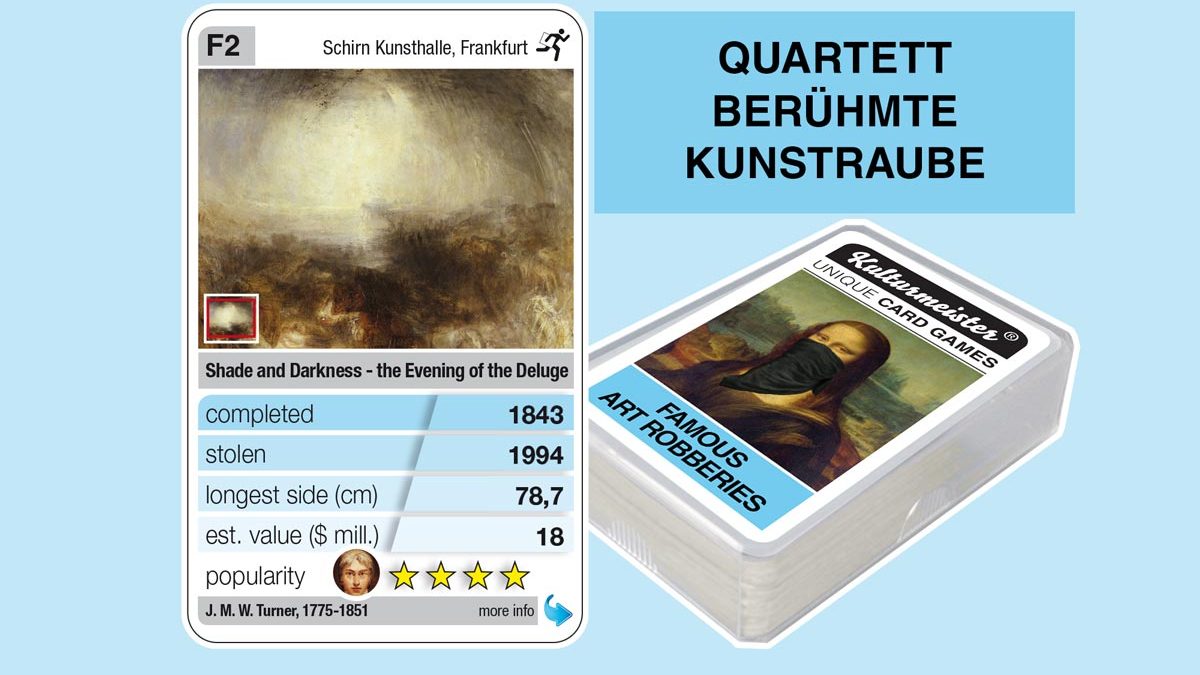 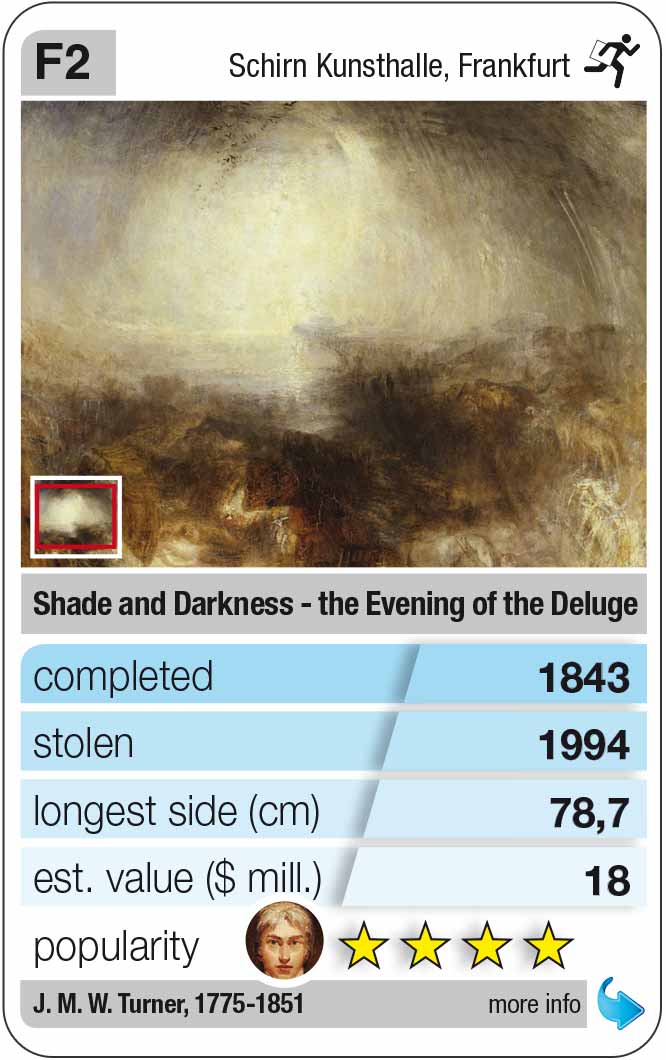 J. M. W. Turner's oil painting “Shadows and Darkness - The Evening After the Deluge” was created in 1843. The painting measures 78.7 cm x 78.1 cm. The artist Joseph Mallord William Turner is considered the master of his time in the production of oil paintings and watercolors. Thanks to his artistic productivity, landscape painting became as important as historical painting. The painting Shade and Darkness - the Evening of the Deluge has a value of at least 13 million euros. The Turners collection was one of the main collections at the Tate Gallery, without which it would never have grown as big as it is today. The robbery of Turner's "Shadows and Darkness" gave the Tate Gallery an additional, multi-million pound profit to help finance their cultivation.

Description of the painting “Shadow and darkness - the evening after the deluge” by J. M. W. Turner

The painting “Shade and Darkness - the Evening of the Deluge” by J. M. W. Turner shows a landscape in an abstract way. In the middle you can see a horizon that divides the painting into heaven and earth. The light shown is circular and therefore appears intense, almost hypnotic. As in Caspar David Friedrich's painting “Nebelschwaden”, flocks of birds are depicted in the clouds. The landscape is painted so abstractly that it leaves plenty of scope for imagination and your own associations. 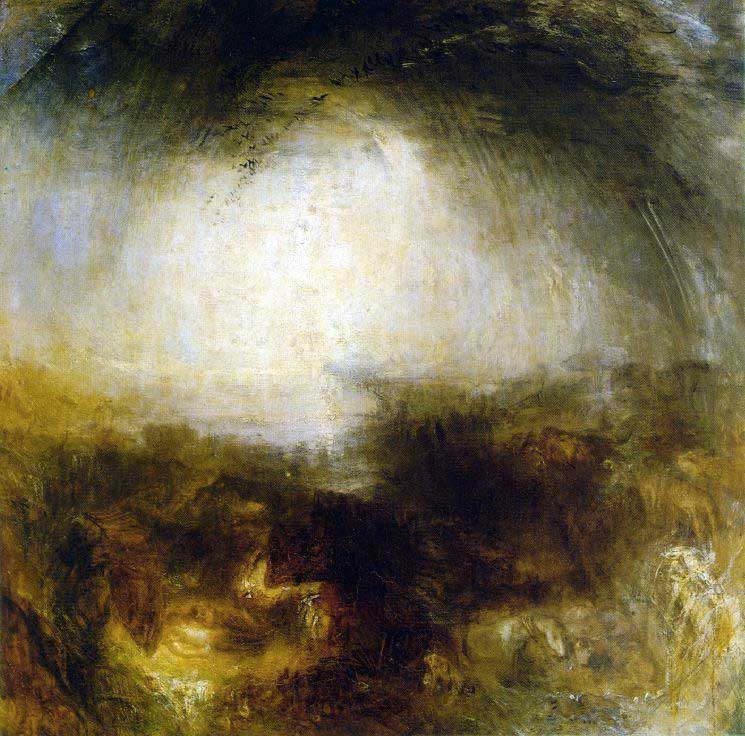 J. M. W. Turner's painting “Schatten und Dunkelheit” was stolen in 1994 at the Frankfurter Kunsthalle Schirn. It showed up again in a spectacular way. It is part of the permanent exhibition at the Tate Gallery in London.

As part of the exhibition “Goethe and Art” in the Kunsthalle Schirn in Frankfurt on July 28, 1994, three oil paintings from the Romantic period were stolen: Caspar David Friedrich's “Nebelschwaden”, JM Turner's “Schatten und Dunkelheit - der Abend after the Flood ”and“ Light and Color ”. The painting by Caspar David Friedrich was on loan from the Kunsthalle Hamburg, the two Turner paintings on loan from the London Tate Gallery.

Three men locked themselves up in the Schirn art gallery on the night of July 28, 1994 and overwhelmed a security guard at night. Then they took the three paintings off the wall and disappeared with the artworks worth at least 50 million Deutschmarks. A few days later, two thieves are caught at the scene thanks to fingerprints. However, they do not reveal the stay of the paintings. In 1999 they were sentenced to eight and eleven years in prison.

Anyone who thinks that this spectacular robbery and clarification has been completed is wrong. Because the real thriller only started now. Through the convicted art thieves, the trail led to a Yugoslav mafia boss named Stevo from the clan of Rade "Centa" Caldovic, who died in 1997 in a shootout. Stevo tried to sell the artwork to an underworld boss in Marbella, but was allegedly unable to agree on the price. A year after the spectacular robbery, the Frankfurt police deployed undercover officers who contacted a Stevos negotiator as buyers. But the deal failed: The negotiator surprisingly doubled the amount requested shortly before the handover. When Stevo was finally caught pulling the Schirner art robbery, there was not enough evidence to arrest him. The case was closed and the insurance paid the loss of the paintings to the museums: the Tate Gallery was paid 24 million pounds by the Hiscox insurance group for the two stolen paintings by Turner, and AXA insurance paid 3.4 million Deutschmarks to the Hamburgers Art gallery for Friedrich's stolen painting.

Liebruck's further negotiation with Stevo now stalled because the Frankfurt mafia boss got cold feet as a previous criminal. In autumn 2002, Liebrucks was contacted by two men who claimed to have the two missing paintings. They were open to business. Apparently the men acted on their own without informing Stevo. With the help of Liebrucks, the London Tate Gallery again bought Turner's second painting “Light and Color” for two million Deutschmarks. Liebrucks received an additional “Finderlohn” from the Tate Gallery for the successful delivery of both Turner paintings. In December 2002 the artwork was again in the hands of the London Museum.

For the Tate Gallery there was another good fortune: shortly after the theft, they agreed with Hiscox Insurance a special arrangement for £ 8m, which, if the stolen Turner paintings were recovered, enabled them to keep the insurance sum already paid . Thus, the Tate Gallery “made” a profit of around £ 15m to finance its new cultivation. The odyssey of the stolen Turner paintings was completed for the London Museum, but not yet for the Kunsthalle Hamburg.