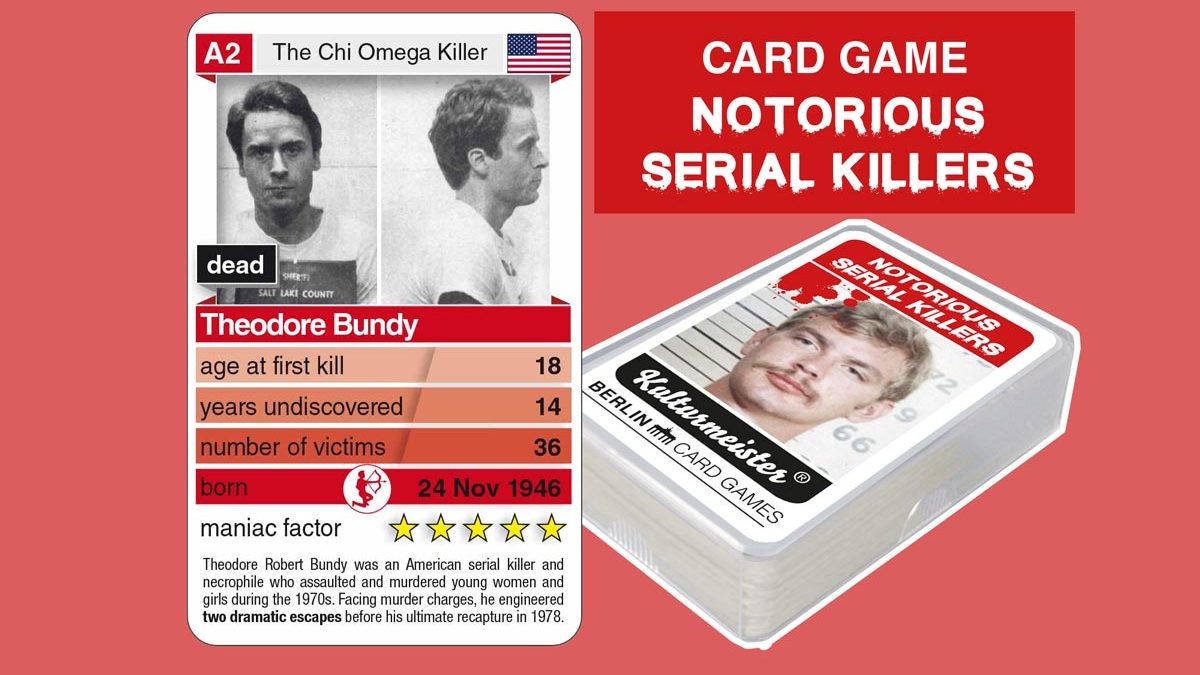 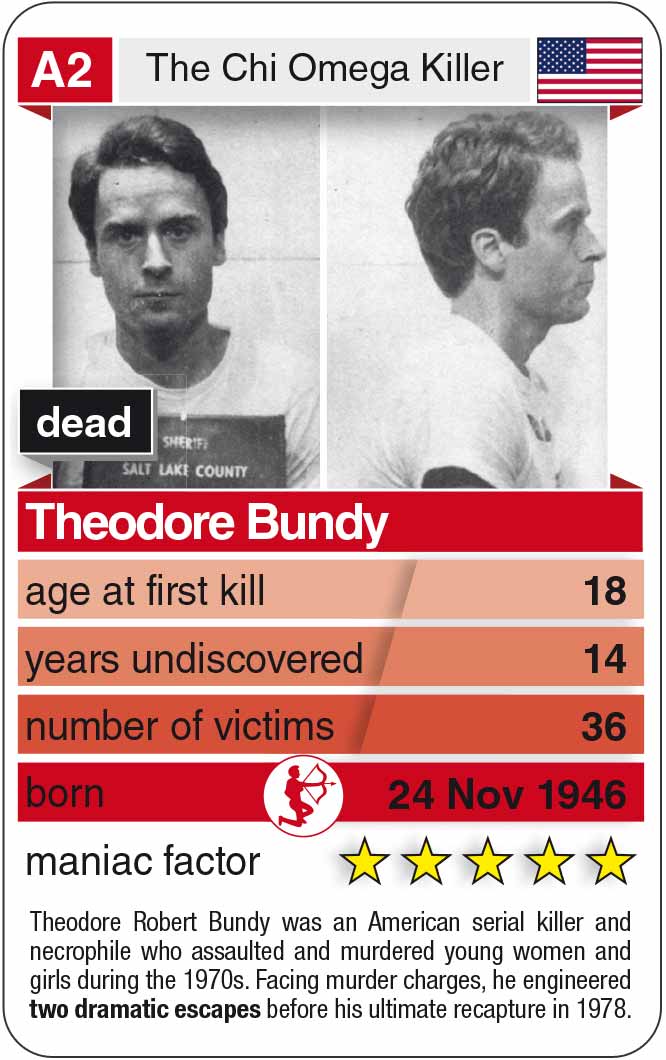 Before his final arrest on February 15, 1978, the serial killer managed to escape prison twice. He had the ability to convince his environment with a combination of authority and charm and escaped the police several times. At the same time, he also used rhetorical skills to gain trust among young women.

Ted Bundy also benefited from his metamorphosis: He always looked different on police photos. You could never say with certainty whether the person in different photos is identical. Added to this was his talent for not showing a physical presence: he never stood out in a public space or in a group. "He could remain invisible," said the various testimony in court after his final arrest. 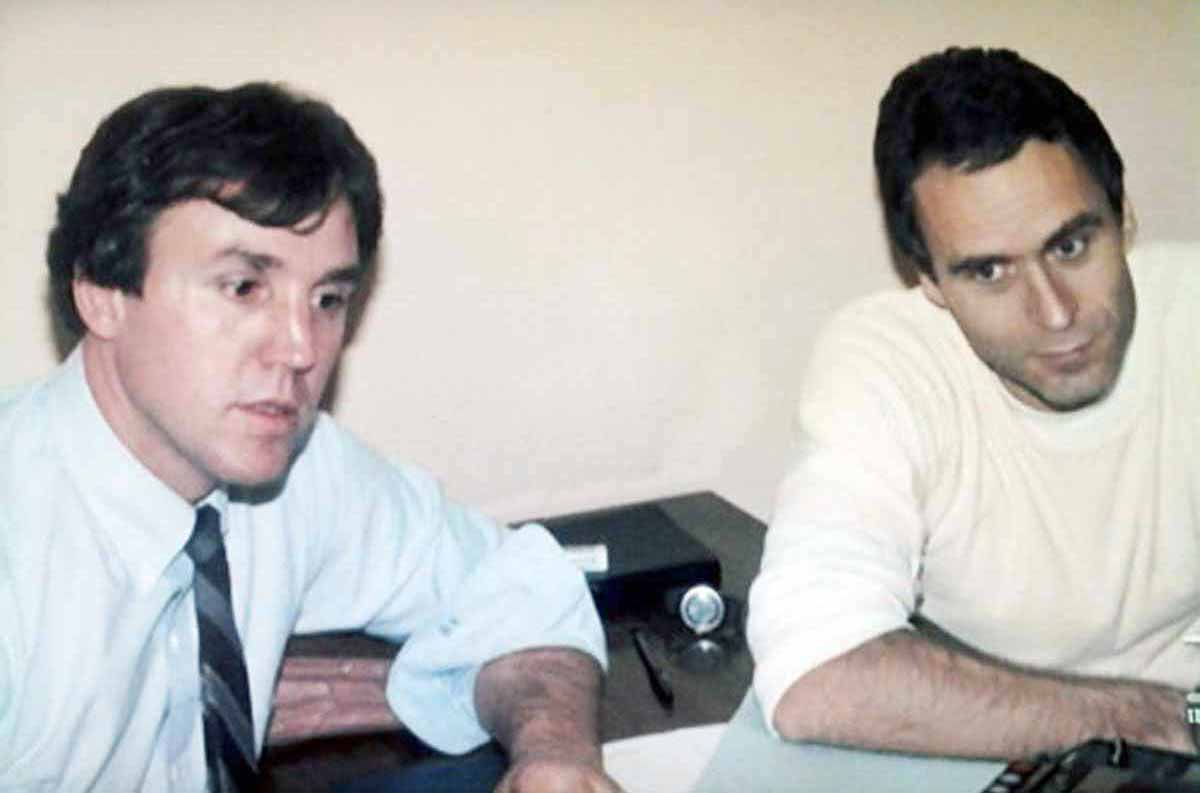 FBI agent Bill Hagmaier and serial killer Ted Bundy in a last conversation on death row the day before his execution on the electric chair on January 24, 1989. Photo: FBI

Ted Bundy studied psychology at the University of Washington at the Faculty of Medicine. He graduated in 1972. He then worked as an election officer for the republican governor Daniel J. Evans for his re-election.

Based on some letters of recommendation from his former psychology professors, he began studying law at the University of Utah in 1973. His love of 1967 - known under the pseudonym Stephanie Brooks - became Ted Bundy's girlfriend again in late 1973. Out of ignorance, she became the partner of one of the most notorious serial killers of all time. For unexplained reasons, he slowly changed his behavior in the relationship with his beloved at that time. Shortly after planned wedding plans, he finally separated from Stephanie Brooks.

A brutal series of murders begins

Ted Bundy's first murders remain unclear, and he has made contradictory statements about his first victims. It is believed that he strangled the eight-year-old girl Anne Marie Burr at the age of 16. His later statements to the police and to the court left many questions unanswered, since he made different statements and sometimes could not remember. It is certain that the girl Anne Marie Burr disappeared on August 13, 1962 and was never found. Ted Bundy lived a few blocks away from her and knew the family.

However, it is clear that shortly after the separation with his long-time girlfriend Stephanie Brooks in early 1974, he demonstrably began to assault women: 18-year-old Kevin Sparks was his first proven victim to have been raped and subjected to serious physical abuse Trauma survived. In the following months, young women in the state of Washington gradually disappear. The missing mostly have long to medium length hair, mostly young students. All victims look similar to Stephanie Brooks, from whom he broke up abruptly.

Arrest and escape of Ted Bundy

In August 1975, Ted Bundy was stopped for a routine check on his VW Beetle. Handcuffs, ropes, ski masks, etc. were found. Things you need to break in. The police detained him for 24 hours but were unable to prove any deeds or planned acts. His girlfriend at the time, Elizabeth Kloepfer, found unusual behavior among her boyfriend, the serial killer, and became suspicious. She then informed the police and said that Ted Bundy was taking strange knives and metal bars with him on his jaunts into the Aspen. She also sometimes woke up at night just to notice that her boyfriend was examining her body with a flashlight.

On November 8, 1974, Ted Bundy kidnapped 18-year-old Carol DaRonch. Because she was able to flee, her statements to the police were compared with those of the previous murder of young women and similarities were found. Ted Bundy was one of the suspects. However, no one of the murders committed could be proven to him, so that he only had to answer to the court for her kidnapping. He was sentenced to one to 15 years in prison and sent to the Utah State Prison. After trying to escape, he was taken to the Aspen prison, where he jumped out of the library stairwell on the second floor and escaped.

Less than two months later, he was arrested again in Florida. After a trial lasting several months, he was sentenced to death. He died on January 24, 1989 in an electric chair - unlike Jeffrey Dahmer, who was killed by a prison inmate.