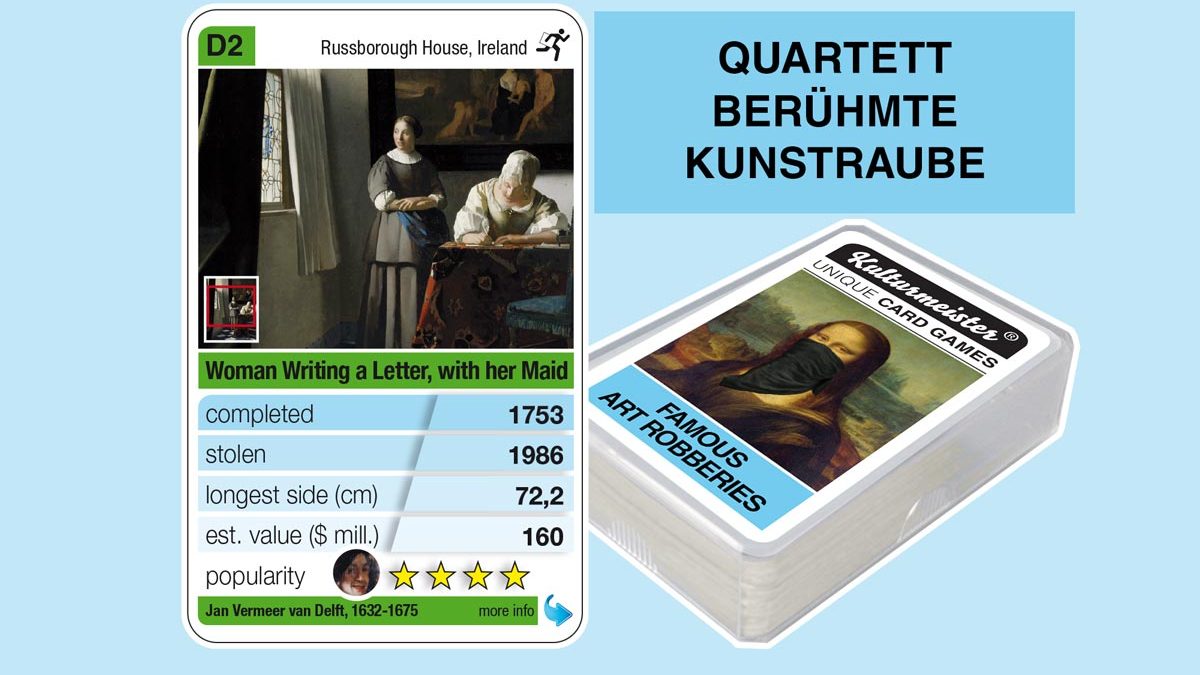 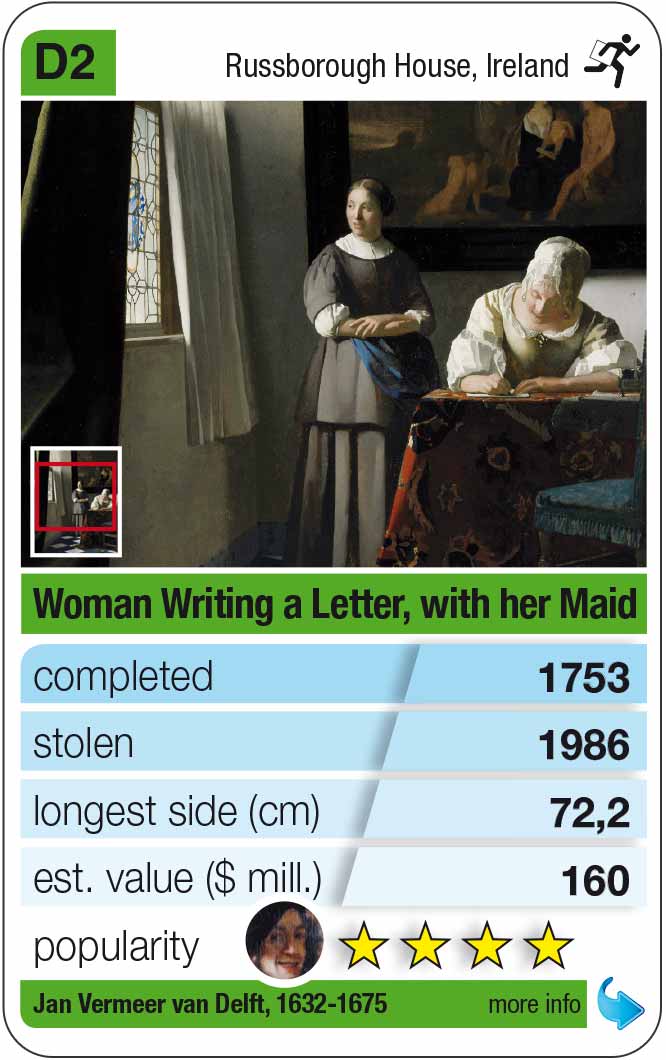 Jan Vermeer: Lady Writing a Letter with her Maid (1671)

Jan Vermeer van Delft's painting "Lady Writing a Letter with her Maid" is just one of about 37 works of art known worldwide that are attributed to the Dutch master. It was completed by the baroque painter around 1671 and has the dimensions 58.4 x 71.1 cm. The oil painting was stolen from Russborough House in 1974 and 1986 by terrorists and organized criminals, and was recovered both times.

The story of Vermeer's “Lady Writing a Letter with her Maid ”

The painting was first mentioned in 1676 by Catharina Bolnes. The same year Hendrick van Buyten received it in Delft. In 1710 it changed hands to Josua van Belle in Rotterdam. In 1730, van Belle's collection was auctioned off. The painting came to Vienna to Viktor von Miller zu Aichholz via several stations, where it was sold to the gallery of Charles Sedelmeyer in Paris in 1881. In 1889, Boussod, Valadon & Co. acquired this picture as part of the Sedelmeyer collection. Six years later, Alfred Beit from London bought it and bequeathed it to Sir Otto Beit. In 1930 the picture, which had been bequeathed to Sir Alfred Beit, came to Russborough House in County Wicklow, Ireland. In 1987, after the spectacular robbery of art at Russborough House, it was handed over to the National Gallery of Ireland in Dublin, where it can be seen today in a permanent exhibition in the Beit wing. 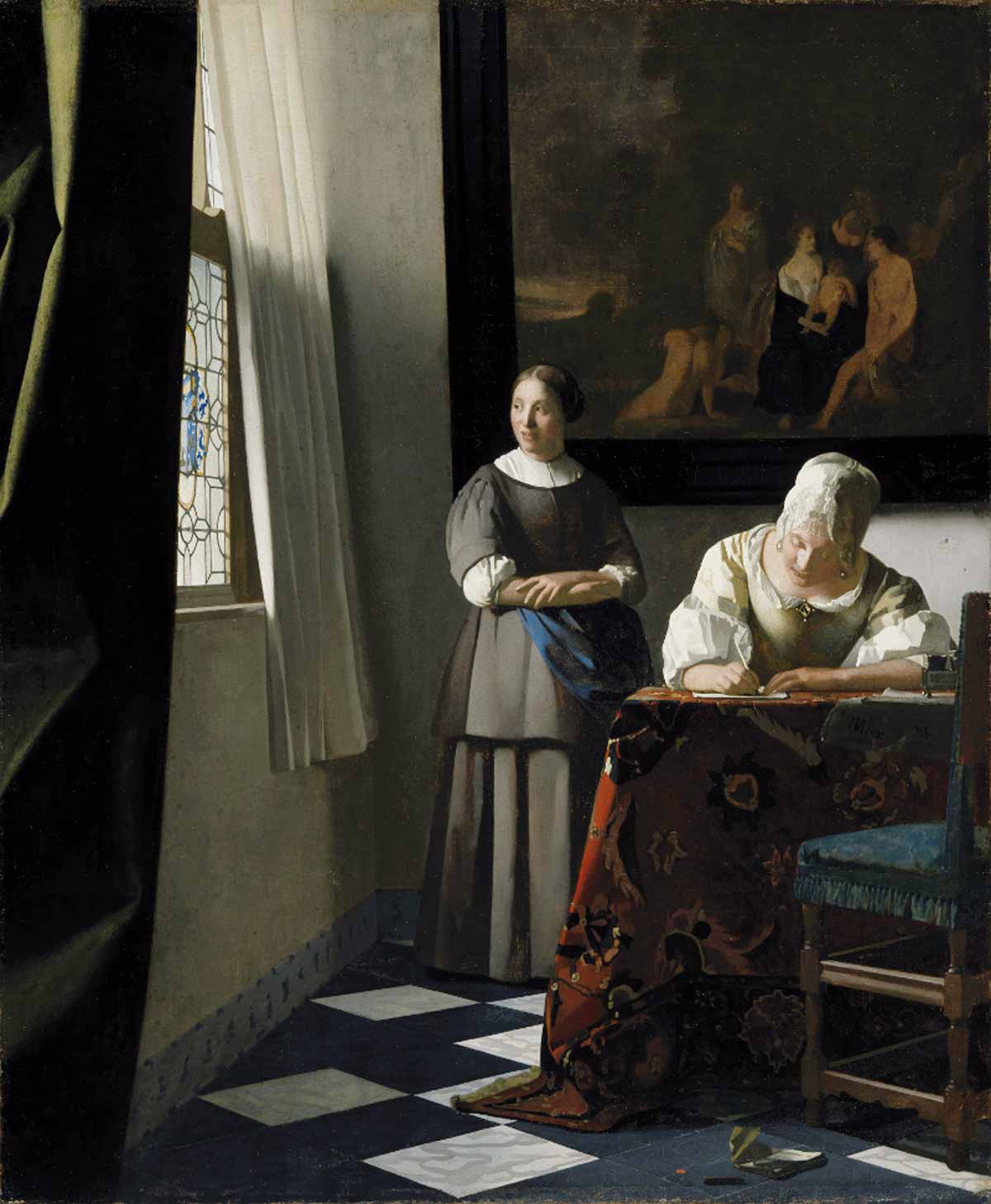 The Dutch painter Jan Vermeer van Delft created the oil painting letter-writing lady with her maid in 1671. It has a market value of over 100 million euros.

On April 26, 1974, a part of the group from the Irish Republican Army IRA entered Russborough House. The terrorists gagged Sir Alfred Beit and his wife before stealing 19 works of art. Rose Dugdale was later identified as the leader of the art theft. Her motive was her boyfriend in prison. She needed money to force her to be released. Among the stolen paintings were works by Goya, Vélazquez and Vermeer's “Letter-writing lady with her maid”. All the stolen paintings were valued at eight million Irish pounds. After a short time, all of the paintings in County Cork were found. Rose Dugdale and her accomplices have been arrested.

In 1986, Russborough House was attacked by Martin Cahill, the underworld boss of Dublin at the time, and 12 other accomplices. They stole 18 paintings, including works by Vermeer, Metsu, Goya, Gainsborough and Rubens. Martin Cahill was shot by the IRA on August 18, 1994.

On June 26, 2001, Russborough House was again the scene of an art theft. This time, several masked people drove into the front door in a jeep-like car and entered the house. After stealing 16 valuable paintings, they set fire to their car and asked a driver to give them his car. When he refused, they fled on foot.

Due to the risk of renewed art theft, part of the Beit Collection from Russborough House has been handed over to the National Gallery in Dublin. Most of the works of art by the old masters can be seen here in the permanent exhibition in the specially created Beit wing.