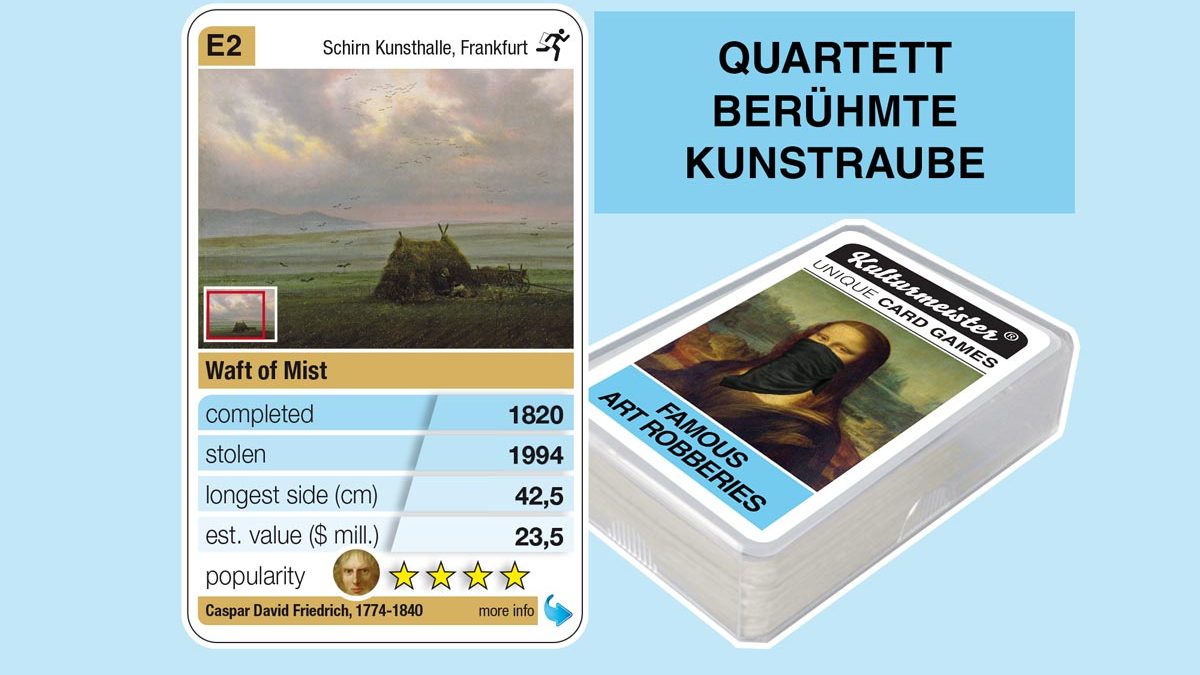 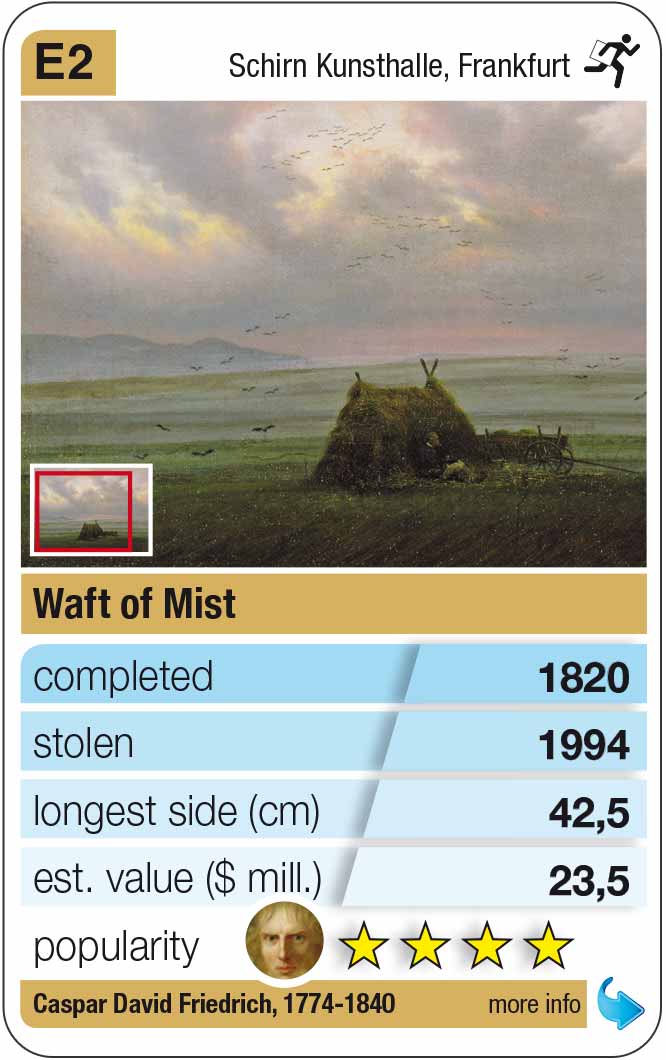 Description of the painting “Nebelschwaden” by Caspar David Friedrich

The painting “Clouds of Fog” by Caspar David Friedrich shows a field with clouds of fog and flocks of birds at dawn. In the middle of the picture is a tent-like haystack in front of which a man is sitting. In the background you can see the horizon, on the left hill. The dramatically painted clouds with light reflections from the rising sun occupy two thirds of the composition.

As part of the exhibition “Goethe and Art” in the Kunsthalle Schirn in Frankfurt on July 28, 1994, three oil paintings from the Romantic period were stolen: Caspar David Friedrich's “Nebelschwaden”, JM Turner's “Schatten und Dunkelheit - der Abend after the Flood ”and“ Light and Color ”. The painting by Caspar David Friedrich was on loan from the Kunsthalle Hamburg, the two Turner paintings on loan from the London Tate Gallery.

Three men locked themselves up in the Schirn art gallery on the night of July 28, 1994 and overwhelmed a security guard at night. Then they took the three paintings off the wall and disappeared with the artworks worth at least 50 million Deutschmarks. A few days later, two thieves are caught at the scene thanks to fingerprints. However, they do not reveal the stay of the paintings. In 1999 they were sentenced to eight and eleven years in prison. 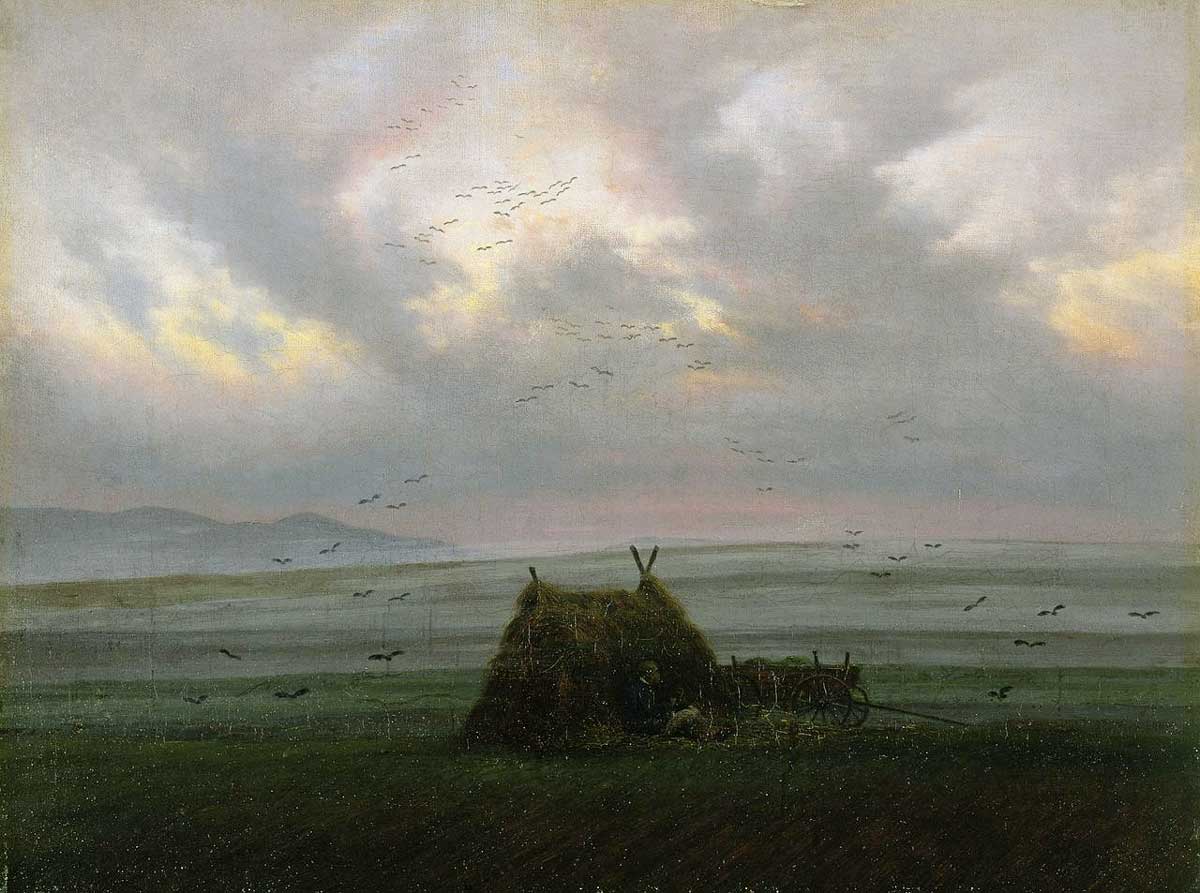 1994 art robbery: Caspar David Friedrich's painting “Nebelschwaden”. The painting is decorated with two other artworks by J.M.W. The gymnast has been stolen and curiously reappeared. It hangs again in the Kunsthalle Hamburg.

Anyone who thinks that this spectacular robbery and clarification has been completed is wrong. Because the real thriller only started now. Due to the convicted art thieves, the trail led to a Yugoslav mafia boss named “Stevo” from the clan of Rade “Centa” Caldovic, who was killed in a gunfight in 1997. Stevo tried to sell the artwork to an underworld boss in Marbella, but was allegedly unable to agree on the price. A year after the spectacular robbery, the Frankfurt police deployed undercover officers who contacted a Stevos negotiator as buyers. But the deal failed: The negotiator surprisingly doubled the amount requested shortly before the handover. When Stevo was finally caught pulling the Schirner art robbery, there was not enough evidence to arrest him. The case was closed and the insurance paid the loss of the paintings to the museums: the Tate Gallery was paid 24 million pounds by the Hiscox insurance group for the two stolen paintings by Turner, and AXA insurance paid 3.4 million Deutschmarks to the Hamburgers Art gallery for Friedrich's stolen painting.

Operation Cobalt: The Tate Gallery, the Serbian Mafia and the Scotland Yard

After the failed handover, the Tate Gallery became active itself. With the help of Scotland Yard, a special unit with the code name "Cobalt" was founded. Stevo's lawyer, Edgar Liebrucks, had good contacts with the Yugoslav underworld. At the end of 1999, he was commissioned to contact the fence to get the stolen paintings from the Schirn Kunsthalle. After successful contact with the traders, they agreed on a total price of five million Deutschmarks. The first stolen painting was supposed to be handed over in July 2000 for a sum of one million Deutschmarks - but Stevo demanded double the money shortly before the completion. Lawyer Liebrucks, who only had a million at his disposal, added another million Deutschmarks out of his own pocket. "Shadow and darkness - the evening after the deluge" became the property of the Tate Gallery again.

The further negotiation of Liebrucks with the Yugoslav mafia got stuck now that Stevo got cold feet as a previous criminal. In autumn 2002, Liebrucks was contacted by two men who claimed to have the two missing paintings. They were open to business. Apparently the men acted on their own without informing their boss Stevo. With the help of Liebrucks, the London Tate Gallery bought back Turner's second painting “Light and Color” for two million Deutschmarks. Liebrucks received the money spent on the two Turner paintings from the Tate. In December 2002 the artwork was again in the hands of the London Museum. The Tate Gallery was also lucky: they agreed a special arrangement with Hiscox Insurance for £ 8m, which, if the stolen Turner paintings were recovered, allowed them to keep the amount they had already paid for. Thus, the Tate Gallery “made” a profit of around £ 15m (less the finder's wages paid to Liebrucks) with which they financed their new cultivation. The odyssey of the stolen Turner paintings was completed for the London Museum, but not yet for the Kunsthalle Hamburg.

After the Kunsthalle Hamburg gave the green light for Liebrucks to regain Friedrich's stolen painting, negotiations began again with Stevo's negotiators. With the money from the Turner paintings sold, the two fencers had spent a pleasant time in Cuba. Now they wanted to move to Brazil after the third and last painting had been sold.

Liebrucks agreed a sum of only 250,000 euros for Friedrich's work with the two guardians - the value is many times higher. It seems as if the fence simply wanted to get rid of the painting. The painting “Nebelschwaden”, which Liebrucks presented to the Kunsthalle Hamburg in August 2003, was successfully handed over. He now asked for the money advanced again by Liebrucks. The Kunsthalle Hamburg surprisingly refused to pay the sum, as Liebrucks could have done something together with the fence. In 2005 this led to a process that Liebruck won a year later. In addition to the pre-stretched 250,000 euros, he received an additional 20,000 euros for the successful replacement of the painting “Nebelschwaden” by Caspar David Friedrich.

Since the Kunsthalle Hamburg had no special arrangement with Axa Versicherung, it had to repay the sum insured of 3.4 million Deutschmarks. To make matters worse, 1.6 million euros were missing in the museum box office, so the Museum der Arbeit, the Helms Museum and the Ethnographic Museum had to help out with their own funds.