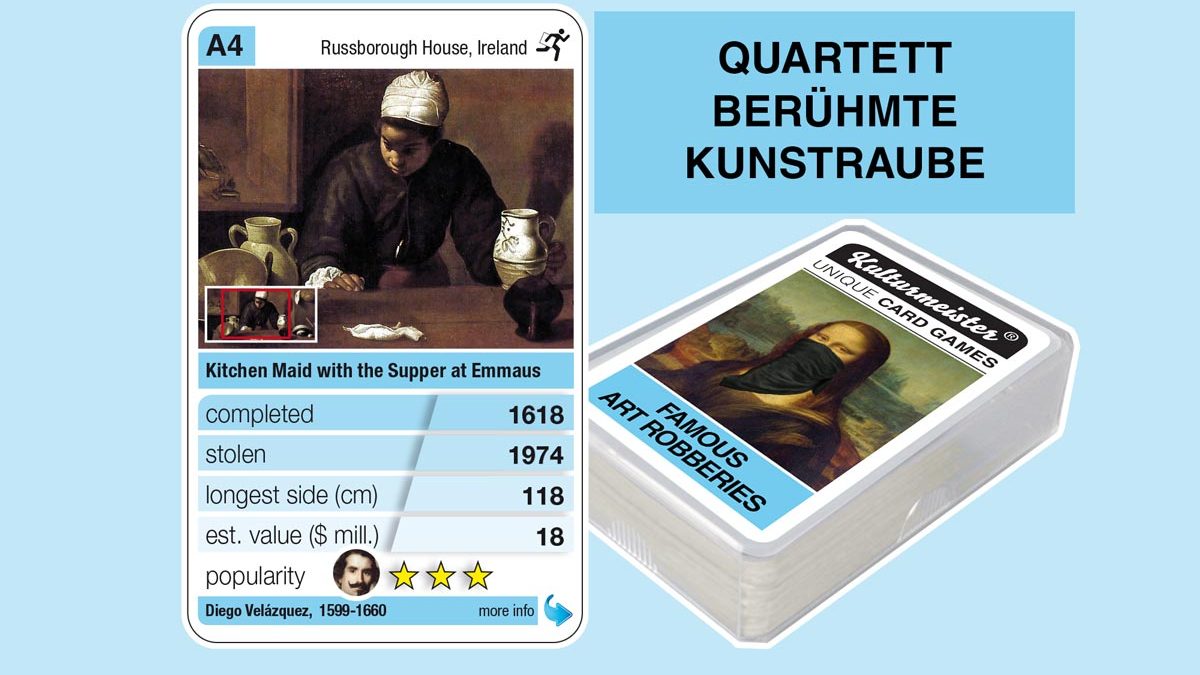 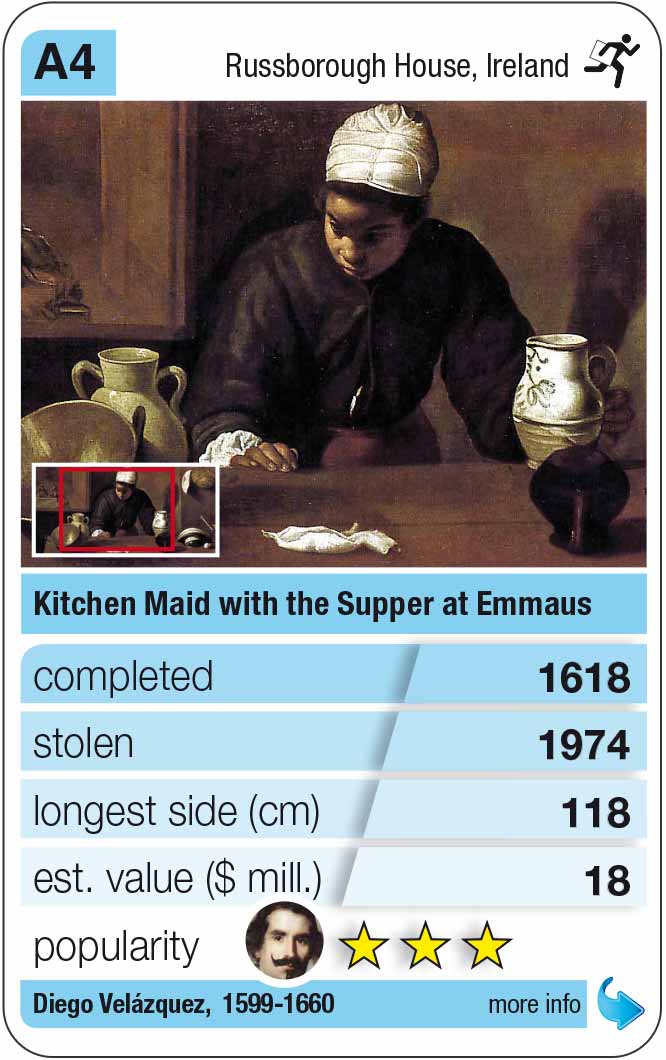 The Spanish painter Diego Rodríguez de Silva y Velázquez (1599 - 1660) created the oil painting La mulata (The Kitchen Maid) in 1618. The painting is also known under the title “Kitchen Maid with the Supper in Emmaus” and has the dimensions 55 cm x 118 cm. Velázquez was born in Seville, Spain and served as court painter to Philip IV. During his creative life, he was one of the most important painters of the Siglo de Oro, the Golden Age of Spain. He died at the age of 61 in Madrid, Spain.

The story of the painting “The Kitchen Scene”

The court painter made two versions of the painting “La mulata (The Kitchen Maid)”. The completion of both paintings is dated between 1618 and 1622. One of the paintings hangs in the Art Institute of Chicago, the other in the National Gallery of Ireland. The Chicago painting was purchased from the Goudstikkr Gallery in Amsterdam in 1927, the other painting was part of the Beit Collection at Russborough House in Ireland. The painting at Russborough House was initially considered a copy of the original, but was later classified as an original. The Spanish work of art from 1618 is considered one of the first works by Vélazquez.

In the painting you can see a dark-skinned woman as a kitchen maid in a room, leaning slightly against a table. It looks like she is watching a bowl that is about to fall off the table. In the background you can see two men dining. A halo hovers over the left person; the scene is reminiscent of Jesus having the sacrament.

Famous art robbery: Diego Vélazquez's "La mulata (The Kitchen Maid)" was stolen from IRA terrorists in 1974 along with 18 other works at Rossborough House in Ireland. The paintings were found a few weeks later.

On April 26, 1974, a splinter group from the Irish Republican Army entered Russborough House. The terrorists gagged Sir Alfred Beit and his wife to then steal 19 works of art. Rose Dugdale was later identified as the leader of the art theft. Her motive was her boyfriend in prison. She needed money to force her to be released. Among the stolen paintings were works by Vermeer and Goya and Vélazquez's early painting “La Mulata” from 1618. The value of all the stolen paintings was eight million Irish pounds. After a short time, all of the paintings in County Cork were found. Rose Dugdale and her accomplices have been arrested.

In 1986, Russborough House was attacked by Martin Cahill, the underworld boss of Dublin at the time, and 12 other accomplices. They stole 18 paintings, including works by Vermeer, Metsu, Goya, Gainsborough and Rubens. Martin Cahill was shot by the IRA on August 18, 1994.

On June 26, 2001, Russborough House was again the scene of an art theft. This time, several masked people drove into the front door in a jeep-like car and entered the house. After stealing 16 valuable paintings, they set fire to their car and asked a driver to give it to them. When he refused, they fled on foot.

After the increased robbery at Russborough House, part of the Beit Collection was handed over to the National Gallery in Dublin. Most of the works of art by the old masters can be seen here in the permanent exhibition in the specially created Beit wing.