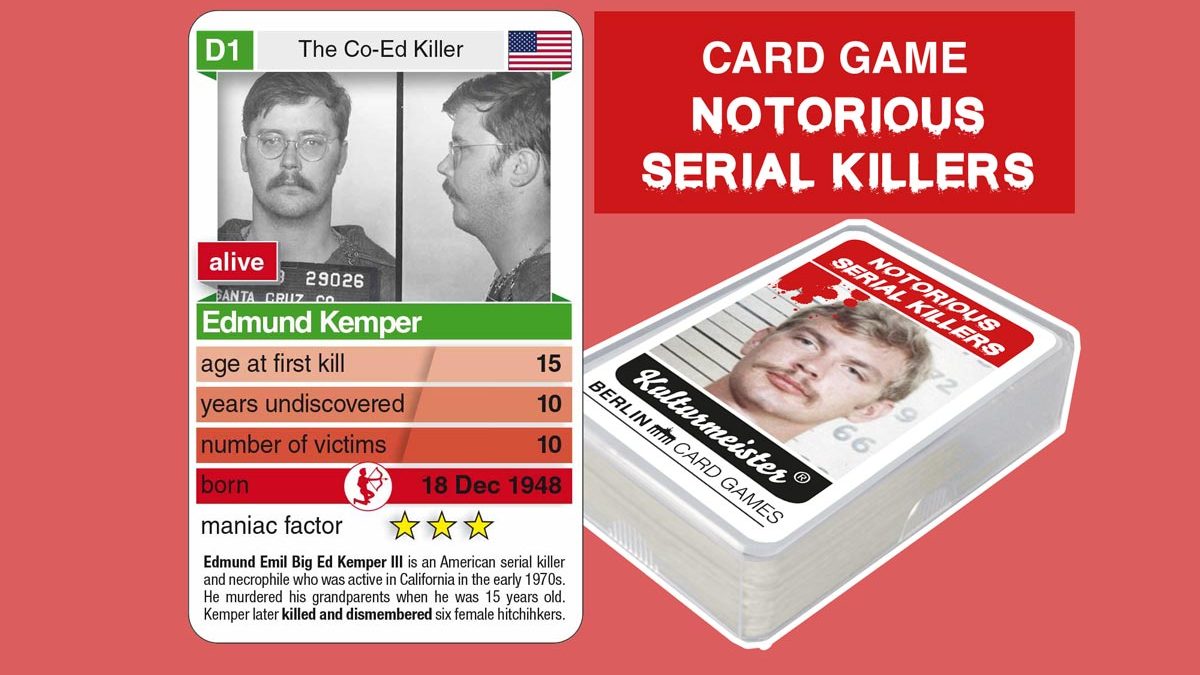 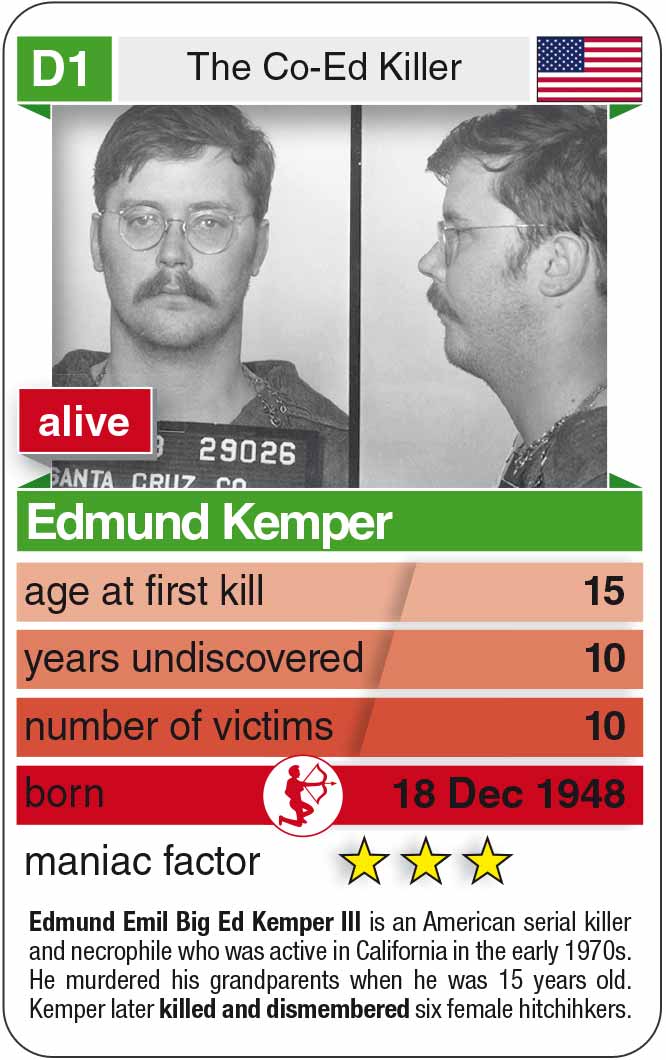 Edmund Kemper: At 15, he kills his grandparents

After his grandfather came home, he also shot him - at the age of 15, Kemper became a double killer. A sad, record-breaking record without any motive for murder. Immediately after his act, he phoned his mother and told her what was happening. She told him the best thing to do was call the police - that was the only thing she could think of while trying to keep her nerve.

“If I had to kiss my teacher, she would have to die afterwards”

Kemper grew up in broken family relationships at a young age. His mother divorced young. He banished him to the basement in his early years to live in it: "His presence disturbs his sisters", the mother explained. Even at this age he had fantasies about murder, which became apparent through the heads of his sisters' dolls. He also liked to mimic the victim himself: he played with his sister “gas chamber”, in which he feigned suffocation. Kemper developed his thoughts when he was very young. Once he told his mother after school: "If I had to kiss my teacher, she would have to die afterwards." 15-year-old Kemper started collecting animal carcasses and examining them. His next step was to kill the cats just to find out what it felt like. Kemper's mother began to understand that something fundamental was wrong with her son. She blamed herself because the marriage to his father broke up.

Young Edmund Kemper was particularly watched by his mother over the next few months. She started to lock her son up in a dark room overnight. "I felt like he was doing something worse to his sisters or worse if he was walking around the house at night." In the meantime, the young Edmund Kemper has tried out his violent fantasies on several cats, which he beheaded and severed their legs in order to keep them in his closet. 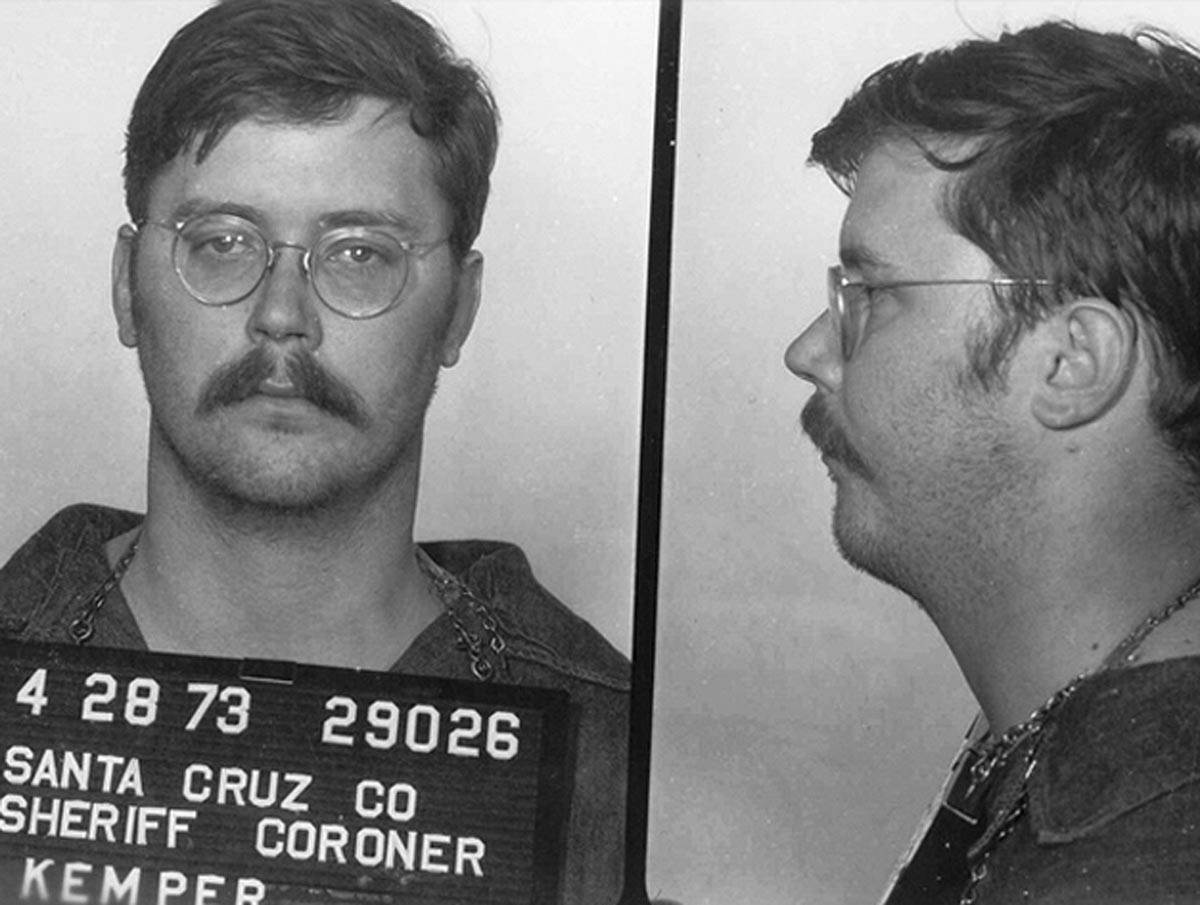 Edmund Kemper, also known as Big Ed because of his huge size, is an American serial killer. When he was 15 he killed his grandparents. Kemper then started a murder tour, taking hitchhikers with him, murdering them and then dismembering them. Photo: Police Dept. Santa Cruz County

“I wanted to see what it feels like to kill someone”

Kemp's mother often brought her son to his grandparents. His grandfather taught him how to kill birds with my shotgun. After Kemper made it excessive, his grandmother banned it. Then Kemper shot her. When he realized what his grandfather would do if he knew he had shot his wife, the just 15-year-old Kemper decided to shoot his grandfather too. Said and done. The youngster then called his mother and confessed his actions. She advised him to call the police.

At the police station, 15-year-old Kemper testified that he just wanted to see what it feels like to kill someone. His grandfather had to die because he knew how angry he would be with him: the young Kemper who just shot his grandmother was so afraid of the consequences of his grandfather's punishment that he killed him. After the police arrived after Kemp's call, all they could do was determine the death of his grandparents. Kemper then went to a psychiatric institution.

The above-average intelligent Edmund Kemper with an IQ of 145 was discharged after several years in the psychiatric clinic. He carefully analyzed the psychologists' questionnaires to give the answers the doctors wanted to hear about discharge. After several mishaps in psychiatric reports, the doctors had no objection to the murderer Edmund Kemper moving back to his mother's house. In the meantime, he has grown to a handsome figure. With a size of 2.06 meters and a weight of 140 kilograms, it had an enormous physical presence in addition to its unpredictability. Kemper used his intelligence and fooled the psychologists, he managed to be a free man again. And he was already making plans in the clinic to continue his atrocities. Edmund Kemper was declared healthy by the error of clinical psychologists and doctors and was allowed to move into his mother's house as a healed man.

Once again at large, the now adult Kemper drove by car through the area around California's Santa Cruz. As a “new hobby” he liked to take female hitchhikers with him. He developed relationships with them, but they only took place in his head. Women triggered a special sexual attraction for him, at the same time he did not know how to approach them. He developed a strategy over the next few weeks to solve this problem: he would kill her.

Kemper, who had grown up, prepared his car like this to carry out his plan with the perfect murder and his subsequent sexual satisfaction from young hitchhikers: he rebuilt his passenger door so that a hitchhiker could no longer get out.

Six hitchhikers had to die from Edmund Kemper over the next few months. He shot, strangled, or stabbed the hitchhikers in his car. He then dismembered them and spread the body parts in different places to cover up his traces. He often visited the places to have sex with the torso. Meanwhile, the police were in the dark: there was no connection between the murders. So no offender profile was created after the search.

Edmund Kemper, now a multiple killer, doesn't have enough: On April 20, 1973, just 24, Edmund Kemper killed his mother with a hammer in her bed while reading a book. Then he calmly called her best friend Sally Hallett and invited her to her house. When she arrived, he strangled her. Overwhelmed by his deed, Kemper drove carelessly through California, Nevada and Utah for days. These last two murders apparently triggered something so that he could not find peace. After three sleepless nights, he called the police and reported what he had done - just like he did nine years ago when he first murdered.

Multiple serial killer Edmund Kemper has been serving a life sentence in Vacaville's California State Medical Facility ever since.