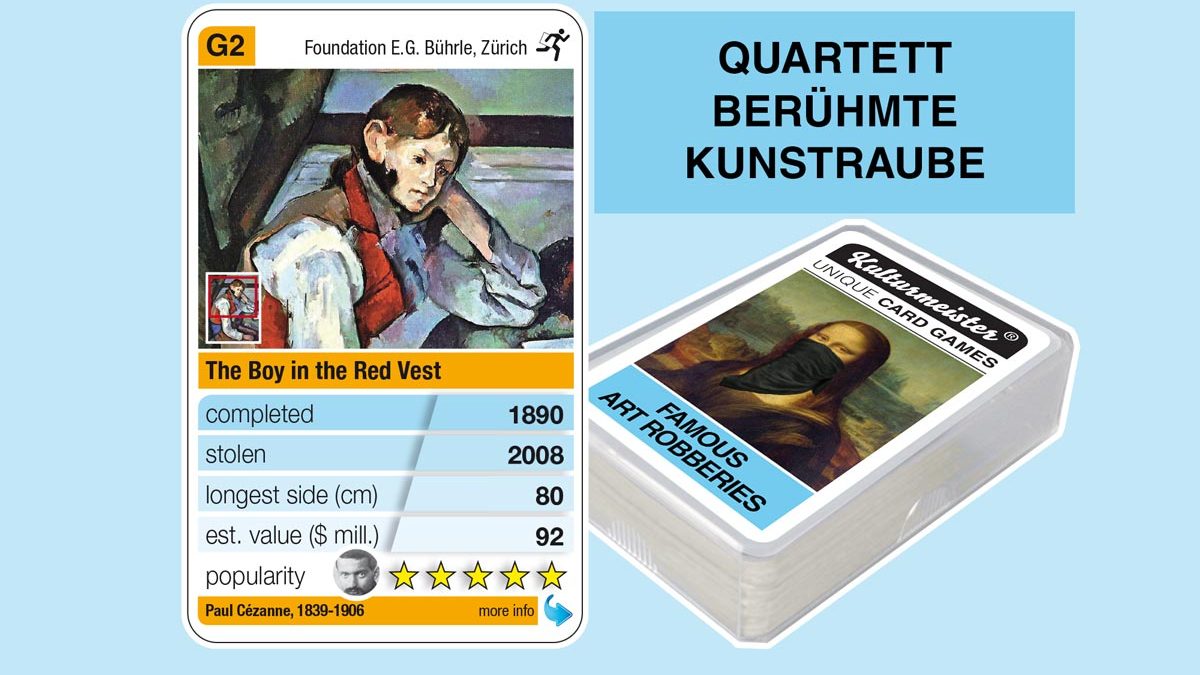 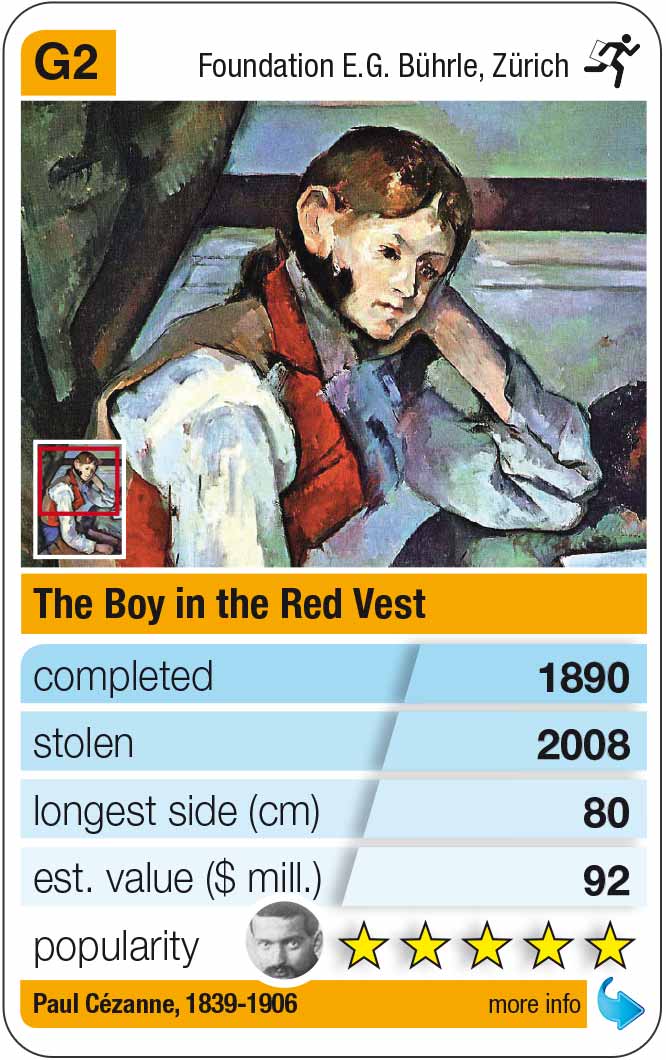 Paul Cézanne, born on January 19, 1876 in Aix-en-Provence in southern France, died on October 22, 1906, at just 30 years of age. From an art historical point of view, he is considered a pioneer in the modern age. At the beginning of his artistic career, Cézanne turned to romanticism and realism with naturalistic works, later there was an intensive examination of impressionism.

Up until the 1890s, Cézanne's works were criticized in public and perceived as unsightly. It was only when the art dealer Ambroise Vollard and Cézanne realized a solo exhibition in the Manzi-Joyant gallery in 1895 that the art scene took a closer look at Cézanne's work. Cézanne has rarely been to Paris since the 1890s. He prefers to paint outdoors in his hometown of Aix-en-Provence. Here he reduces the natural forms to geometric figures.

The history of the painting “Le Garçon au gilet rouge”

Cézanne's painting from 1890 was acquired by Ambroise Vollard from Paris in 1895, probably in connection with Vollard's exhibition in the Manzi-Joyant gallery, which was dedicated solely to Cézanne. Cézanne becomes an insider tip in the Paris art scene and the prices of his paintings will increase a hundredfold in the next few years.

In 1907 the painting left France for the first time. It is exhibited in the Budapest Nemzeti Szalon. In 1909 the painting was sold to the Hungarian baron Marczell de Nemes for 20,000 francs. Nemes buys many paintings by the Impressionists and the avant-garde, thereby setting new standards in the art trade. The baron sends the painting on tour with other paintings, including the Alte Pinakothek in Munich and the Städtische Kunsthalle Düsseldorf. In one of these places, the wool cloth manufacturer Gottlieb Friedrich Reber noticed the painting. Since Baron Marczell de Nemes desperately needs money, many of his paintings are sold. The boy in the red vest is therefore returning to the Manzi-Joyant gallery in Paris for auction.

On June 18, 1913, Reber purchased the painting for 56,000 francs and kept it for 35 years. In 1925 Reber sold all of his 28 Cézannes - except for the “boys”. During the Third Reich, he served in the service of Generalfeldmarschall Hermann Göring - as an art buyer. After World War II, Reber went bankrupt and met cannon maker Emil Georg Bührle.

In August 1948, Bührle acquired the painting for 400,000 francs. Henceforth, the picture goes on a world tour with further pictures from the Bührle Collection and always returns to Bührle's Villa at Zollikerstrasse 172 in Zurich, which is now the E. G. Bührle Collection. Weapons manufacturer Bührle has owned “The Boy in the Red Vest” for 60 years - until February 18, 2008.

Famous art robbery: Paul Cézanne's "boy with a red vest" (1890) was stolen on February 10, 2008 by three masked men in the Zurich E. G.Bührle Foundation together with three other masterpieces. In April 2012 the picture reappeared in Belgrade.

Paul Cézanne's art robbery “The boy in the red vest”

On Sunday afternoon, February 10th, 2008, three masked men invade the E. G. Bührle Collection Foundation in Zurich. According to witnesses, the men wear dark pointed hoods with eye slits. A masked man asks the museum staff and visitors to lie on the floor and behave calmly.

The two other men go into the large exhibition hall, in which ten masterpieces of Impressionism hang. They take the first four of the ten paintings off the wall and apparently notice that each painting with secured glass weighs at least ten kilograms. Apparently the two thieves are only able to carry two paintings, because they steal only four of the ten important paintings of Impressionism. Together with the third accomplice, the art thieves disappear as quickly as they came.

The four stolen works are: “Ludovic Lepic and his daughters” (1871) by Edgar Degas, Paul Cézanne's “The boy with the red vest” (around 1888), “Blossoming chestnut branches” (1890) by Vincent van Gogh and “Poppy field near Vétheuil” (around 1879) by Claude Monet. The total value: a total of around 130 million euros. The robbery is described as "probably the largest art robbery in Europe". However, what the perpetrators - and apparently those responsible for the Bührle collection - did not know: Van Gogh's stolen painting "Blossoming Chestnuts" is said to be a fake.

The stolen paintings from the Bührle Collection reappear

The paintings by Monet and van Gogh are found eight days later in a car with a stolen license plate in the parking lot of the Burghölzli Psychiatric Clinic. However, there is still no trace of Cézanne's “boy in a red vest” (value: around 66 million euros) and Degas “Graf Lepic and his daughter” (value: around 9 million euros).

In April 2012, almost four years later, 30 investigators from six different countries track down an art thief gang that leads to Serbia. Shortly thereafter, contact is made with the alleged owners of the paintings that were still stolen: the Kripo had to pay the informants around 1.4 million euros in cash for a meeting to take place. On April 11, 2012, the investigators struck in Belgrade: four suspects were arrested in a car with the stolen paintings by Cézanne and Degas. The pictures have cracks and a chipped edge because they have been removed from the frames. A large amount of cash and weapons are also secured. The Swiss authorities know the detainees: They have been listed as serious criminals in the database for years.