playing card A2: Da Vinci: Madonna of the Yarnwinder 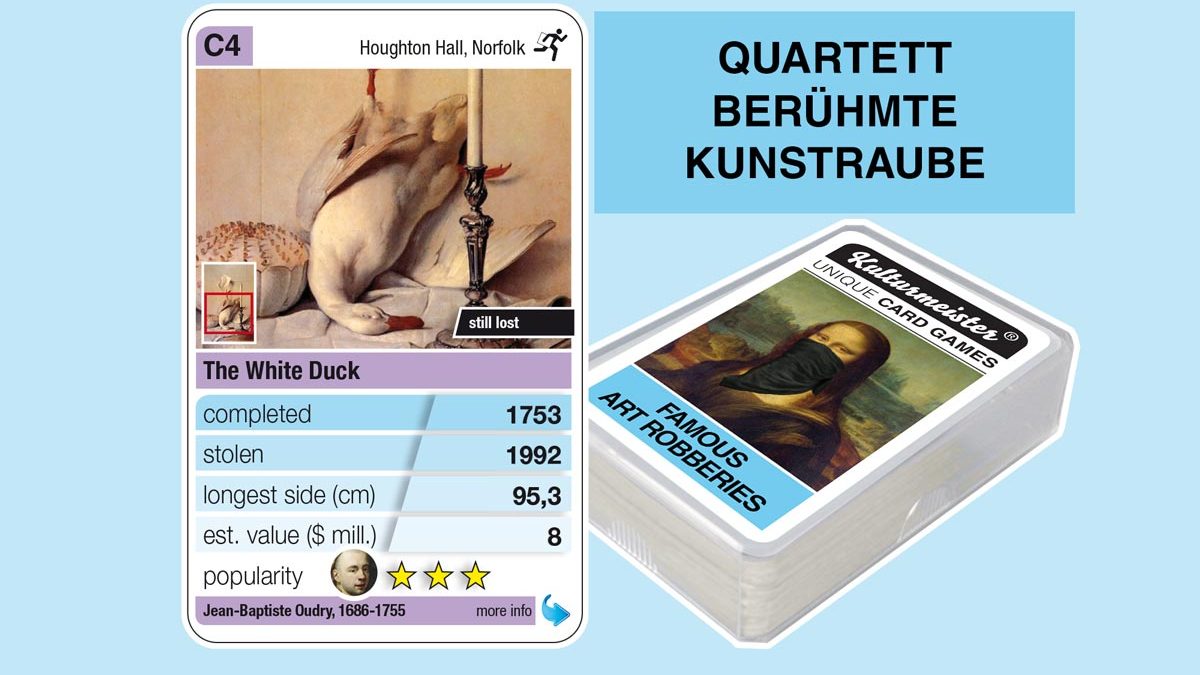 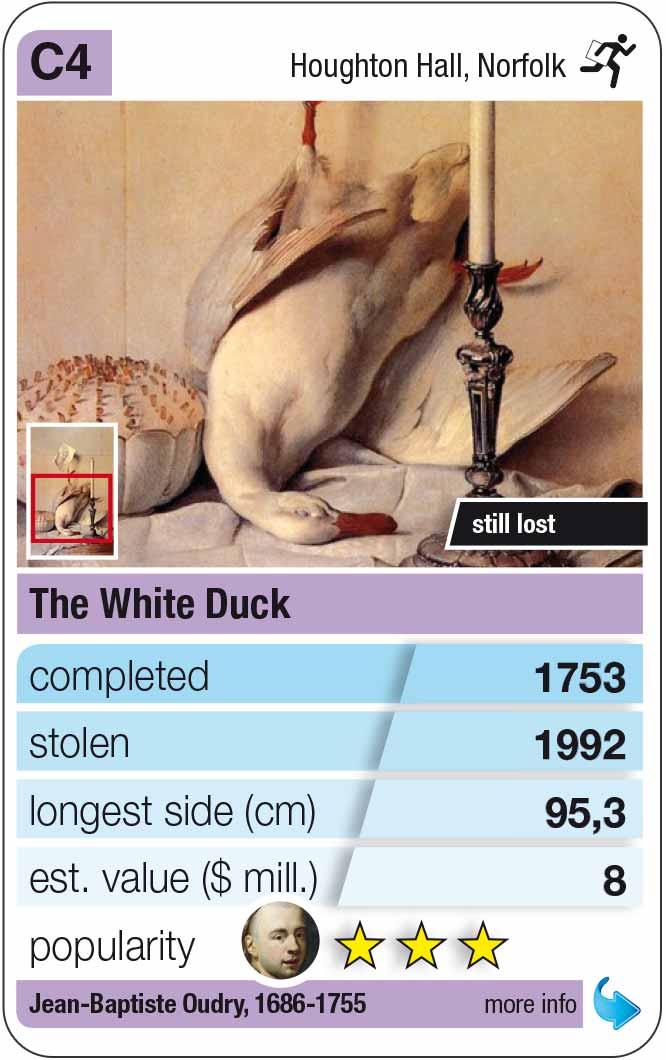 Jean-Baptiste Oudry was born in Paris on March 17, 1686. His father was a painter and art dealer. Oudry's works of art are attributed to Rococo, which developed from the late Baroque. The painters Thomas Gainsborough and Francisco Goya, for example, also belong to the Rococo era. Oudry became known as the court painter of Louis XV. On April 30, 1755, Oudry died of a stroke. His resting place is in the Saint-Étienne church in Beauvais.

Many famous artists from the past centuries would never have existed if they had listened to their father. Peter Paul Rubens, for example, would have been a lawyer according to his father's will. It is probably due to the stubbornness of the children that they realized their dream job.

Different with Jean-Baptiste Oudry. His father was the director of the Académie de St-Luc art school, which he also attended. At the age of 22, he graduated in art. At that time he mainly painted portraits under the supervision of Nicolas de Largillière. Just a year later, he married the daughter of a mirror maker, Marie-Marguerite Froissé. At just 31, he became a professor at the Académie St-Luc. In 1719, Oudry was accepted into the Académie royale de peinture et de sculpture artist association founded by King Louis XIV.

Oudry mainly made portraits, but also devoted himself to still life with fruit and animal painting. Through his friend Jean-Baptiste Massé, he got in touch with the royal family. He soon made his first painting on behalf of King Louis XV with the title “Louis XV hunting a deer in the Forest of Saint-Germain” (1730). Oudry thus became the royal court painter for hunting scenes by King Louis XV. From then on he taught in the Palais des Tuileries and moved into an apartment in the Louvre in Paris. During this period he made countless oil paintings with hunting scenes and animals.

At the request of Louis Fagon, Oudry decorated his home furnishings with arabesque picture elements as well as floral and bird motifs. This work was reproduced in a Beauvais wallpaper factory. At the time, Oudry was a wealthy man thanks to the many orders from the highest social classes. 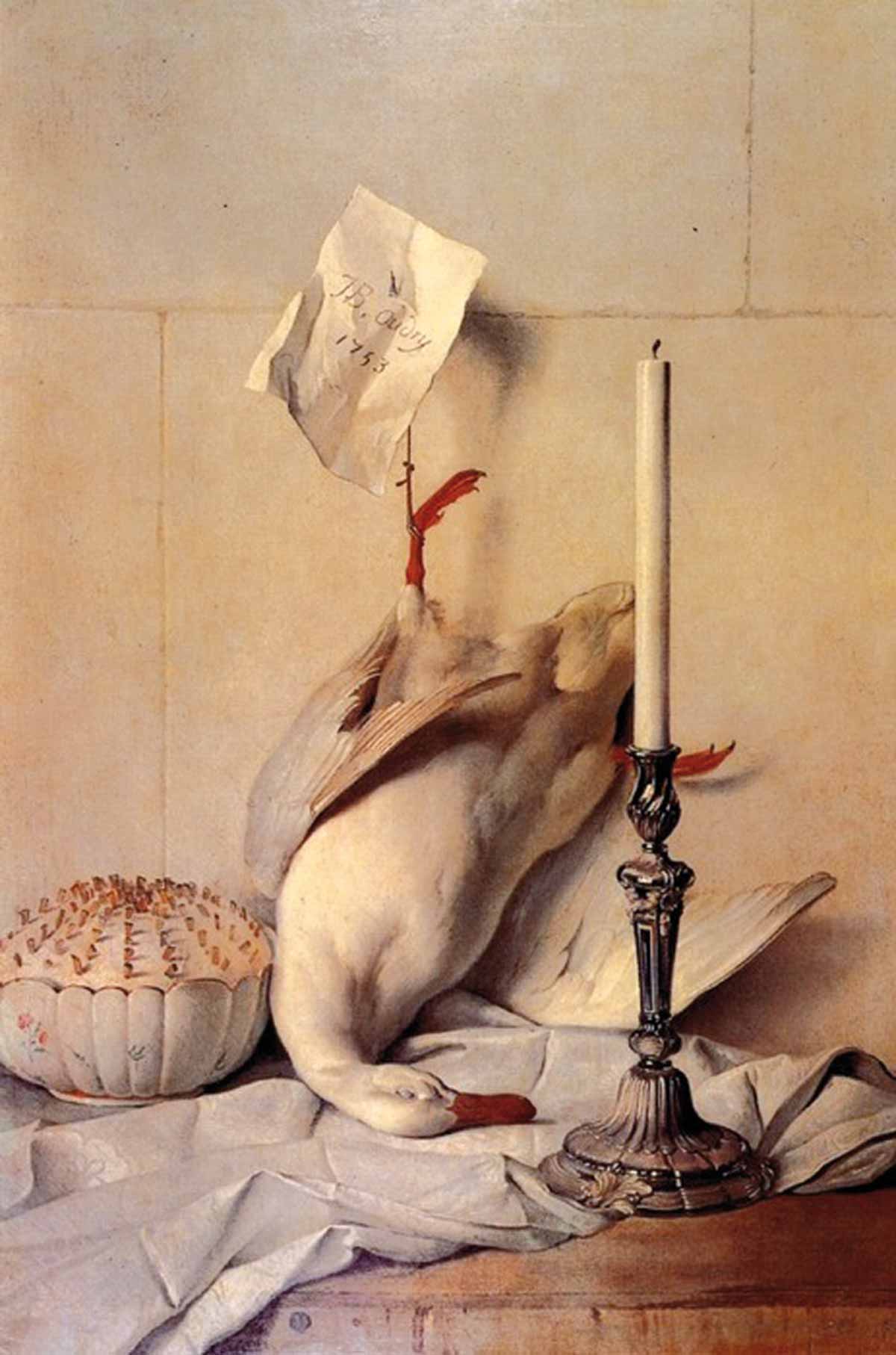 Famous art robbery: Oudry's painting Still Life with a White Duck shows a table with a dead duck and a candlestick.

Jean-Baptiste Oudry's oil painting “The White Duck” was part of the Walpole collection, which was exhibited in the Houghton Hall country house. The decisive factor for this collection was the first English Prime Minister Sir Robert Walpole, who was based in Houghton Hall. He acquired countless portraits, including works by Rembrandt, Van Dyck, Poussin and Rubens. After his death, much of this collection was sold to Catherine the Great in 1779 and to the Hermitage Museum in St. Petersburg. Other paintings came to other Russian museums. In 2013, 70 paintings from the Walpole Collection were brought back to Houghton Hall for an exhibition at the Hermitage. The exhibition was realized by the oil company BP.

Marquess of Cholmondeley and the robbery of the painting

The ownership of the Houghton Hall manor passed to the Marquess of Cholmondeley in 1797. Jean-Baptiste Oudry's painting “Still Life with a White Duck” thus became part of the Cholmondeley Collection. The painting has the dimensions 95.3 x 63.5 cm. It was stolen from Houghton Hall in 1992 and has since disappeared. Its value is estimated at around six million euros.